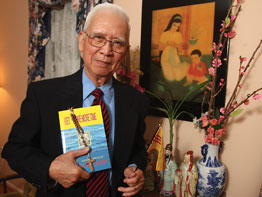 Hai Dang Nguyen’s world was crumbling around him in April 1975. The Communists were on the verge of completely overrunning South Vietnam and Mr. Nguyen knew he had to get his family out of the country.

The former assistant minister of state had held several high positions in the anti-Communist government and he had been friendly with the Americans. He knew he faced a grim and uncertain future if he didn’t escape Saigon.

At 2 a.m. on April 30, 1975, the very last day of the war, Mr. Nguyen and his wife, Vu Nhat-Thanh, their six children and other family members boarded a clunky, slow-moving oil tanker crammed with frightened refugees. Captained by Mr. Nguyen’s cousin, who worked for the Nam Hai Company that owned the ship, the tanker was ostensibly bound for Phu Quoc Island, but its real destination was Singapore and, ultimately, Guam and freedom in the West. The Nguyen family made it to the tanker after traveling some 60 miles on another ship owned by the Nam Hai Company.

“We were on the Pacific for 34 days going 5 knots an hour,” remembered Mr. Nguyen, a 79-year-old parishioner of St. John the Evangelist in Columbia. “The captain didn’t have any navigation system, so he had to look at the stars.”

The Nguyen escape from Vietnam is one of several adventures recounted in his new book, “Get up One More Time,” published by H&T Publishers, LLC. The book emphasizes the importance of faith, hope, determination and positive thinking in the face of hardship.

In an interview with The Catholic Review, Mr. Nguyen said he relied on God during his escape from Vietnam.

“We prayed the rosary every day,” said Mr. Nguyen, a Catholic convert who made the trek while his abdomen was bandaged from an earlier surgery.

Sitting in his Ellicott City home as he described those perilous days, Mr. Nguyen clutched the same wooden prayer beads he used on that ship more than 30 years ago. He carries them in his pocket everywhere he goes.

“We lost everything,” said Mr. Nguyen, noting that he had a well-paying job and owned several properties in Vietnam. “There were a lot of people who were depressed. I wasn’t that way at all. Everything must be under God’s plan. If I didn’t believe that, we would have never made it through.”

Twice before, following the Japanese occupation of World War II and during the Indochina War, Mr. Nguyen had lost everything. Faith got him through just like it would on the tanker, he said.

In America, Mr. Nguyen found a job working in the Howard County government. His family received support from St. John and the interfaith community in Columbia. Parishioners donated clothing, furniture and other goods to support his family when he first arrived. One parishioner bought a new bedroom set that the Nguyens still use today.

“This country has meant a lot to me,” said Mr. Nguyen. “This is the land that helped us to rebuild.”

Vietnam is still suffering under the Communists, according to Mr. Nguyen. They are stealing from the people and oppressing the poor, he said.

“People in the top levels of government are the wealthiest in the world,” he said. “There’s no freedom at all and there aren’t just trials. That’s why my wife and I have decided that we won’t go back.”