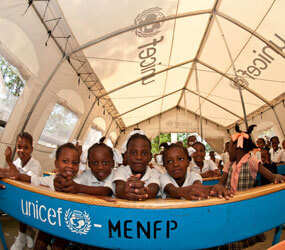 PORT-AU-PRINCE, Haiti – For the first time in St. Antoine School history, the teachers are worried about their sixth-grade girls.

Before the Jan. 12, 2010, earthquake, 100 percent of St. Antoine’s students passed state exams that qualify them to move on to the seventh grade and secondary school. This year, however, most of the girls are living in tents in crowded settlements such as the one at Champ de Mars, a plaza across the street from the country’s destroyed presidential palace. Schooling has been a challenge.

Before the earthquake, 700 students were enrolled at St. Antonie; now there are 570. Many families are having trouble coming up with $180 annually for school fees, to say nothing of books and uniforms. The Canadian Catholic Organization for Development and Peace, the Canadian bishops’ aid agency, pays for hearty lunches of rice and beans with vegetables and meat. The girls are eating better than their parents.

Still, the girls’ biggest handicap is the loss of their school building, said St. Antoine’s principal, Sister Sainte-Anne Jean-Baptiste. The old school is a heap of rubble and the Sisters of St. Anne have no money to clear it and rebuild or relocate to another site.

“The education we want to give children we can’t give right now,” said Sister Sainte-Anne. “They need to progress, to go from one success to another. It’s almost impossible to study in the tents.”

The school has arranged to borrow use of classrooms at Mary Queen of the Immaculate Conception School. When that school lets out in the afternoon, St. Antoine’s staff moves in. But St. Antoine staffers have no offices, no meeting rooms, no equipment, nothing but the classrooms, many of which are squares on the concrete courtyard walled off by sheets of plywood beneath a tin roof; they hold about 40 girls each.

Their teachers also live in tents, though many are able to remain at the site of their old homes and thus are spared the crowded, fetid, cholera-breeding tent camps.

Michelle Auguste, a veteran teacher, believes in her students.

“With education these girls will do anything,” she said.

Cecile Romiette Auguste is now in her second year at National Taiwan University studying physiotherapy. She speaks French, Creole, Spanish, English and Mandarin. She may pursue a master’s degree after graduation.

“Those who educated me in elementary school and high school, even if I might spend my life talking about them, I don’t think I could ever describe to you half their worth,” she wrote in an e-mail.

She visited home last summer and wept at the ruins of her old school.

“I believe strongly that a generation of women who graduated from St. Antoine can transform the fate of my country,” Cecile Romiette Auguste said.

Eighty-nine percent of Haiti’s schools – including two universities in Port-au-Prince – were destroyed in the earthquake. The Haitian government has developed a $4.2 billion, five-year plan to cover education but does not have the money to implement it. Current government spending is around $80 million per year. The Inter-American Development Bank kicked in $50 million in November and pledged to contribute $250 million over five years.

The U.N. Development Program lists Haiti’s literacy rate at 62 percent, but most observers think the real rate is just above 50 percent. Experts believe that for Haiti to become a functioning democracy the literacy rate would have to rise significantly among the earthquake generation.

At another school, Immaculate Conception, Haiti’s future looks bright. The schoolyard is filled with happy, energetic girls rehearsing a dance for a school show. Annual fees are $500, and while these children’s families are not necessarily rich, they are less likely to be caught up in the tent camps than St. Antoine students.

Development and Peace has provided $350,000 to the Missionary Sisters of the Immaculate Conception to build the second story of a two-story school. As construction on the earthquake-proof building proceeds, classes meet under tents.

The sisters have put their students and the school ahead of their own comfort. While the hilltop site is host to a busy construction crew, the nine sisters live in four classrooms in the old school. All of the community’s possessions, from clothes to books, are piled in an old boxcar nearby. Every Sunday, 300-500 people gather in the open space where the rubble has been cleared to celebrate Mass with the sisters.

Sister Josette Drouinard would love the new building to have an auditorium and chapel, but there are no funds. Nonetheless, she is proud of the new school under construction.

“It will be a functional building, but with all the comforts,” she said.