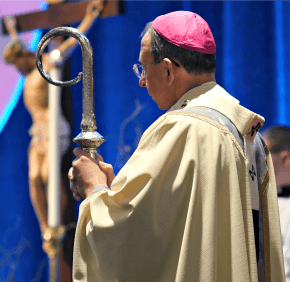 Baltimore Archbishop William E. Lori prays during a Feb. 13 Mass at the Mid-Atlantic Congress for Catholic Leaders held Feb. 12-14 at the Baltimore Hilton. (CR File)|
In his first pastoral letter – an authoritative statement of intent as well as an appeal for enthusiastic collaboration addressed to all his people – Archbishop William E. Lori declares that the Archdiocese of Baltimore will bring the Gospel to everyone who needs to hear it, which means everyone, period.
Released last week, the archbishop’s epistle, “A Light Brightly Visible: Lighting the Path to Missionary Discipleship,” informs pastors and parishioners that the archdiocese will be answering the call of Pope Francis, who has relayed the call of Jesus to “Go, therefore, and make disciples of all the nations, baptizing them in the name of the Father, and of the Son, and of the Holy Spirit” (Mt 28:19).
For Archbishop Lori, “all the nations” starts at home, but the mission is ever-growing.
“A parish may well attract people from beyond its own ZIP code, but it can never cease to reach out with missionary love to the people in its own ZIP code,” he writes.
In addition to faithful Catholics, the archbishop calls parishes to make connections with “those who no longer participate, those who are in need of help, those who have been hurt by the Church, or those who are seeking for some kind of meaning and stability in their lives.”
Archbishop Lori exhorts parishes to be “outward bound,” reaching out in welcome to the parishioners and potential parishioners within their boundaries, including “large numbers of African-American individuals and families, as well as a growing number of Africans, Hispanics, and people from many Asian nations.”
The archbishop singles out the Millennial Generation – young people born anywhere from the early 1980s to the 2000s – as one group in particular need of evangelization, as they are “becoming one of the fastest (generations) to move away from participation in the life of faith and declare themselves ‘none’ or no religion at all.”
It’s a serious piece of work, Archbishop Lori acknowledges, and he encourages his readers to start by  re-evaluating their own relationships with Christ.
“Is it warm, personal, transformative, or is it cold and formal?” is a question the archbishop asked himself, he reveals in his pastoral.
The prospect of becoming and creating missionary disciples begs another question, he writes:
“What decisions need to be made so that we can marshal the resources the Lord has given us to do the work of the Gospel?”
Laying out a plan of action, Archbishop Lori states that the archdiocese will be providing all parishes with an assessment tool to help them gauge their own “mission-vitality,” as well as a “compilation of data, demographics, and maps packaged in ways that are easy to understand” and use in upcoming discussions, which may be facilitated at parishes’ requests.
The assessment tool will be developed and tested during the summer of 2015, the archbishop writes, and, beginning in September, individual parishes will begin to have “discernment discussions” before submitting strategies for enhancing missionary activities to the archdiocesan Office of Pastoral Planning by the first Sunday of Lent in 2016, or the first Sunday of Advent in 2015 for those parishes eligible for more condensed timelines.
Once those strategies are submitted, then parishes will be asked to suggest collaborative “clusters,” or reciprocal arrangements with other parishes in which their resources and strengths would complement those of their partners, and vice-versa.
“The resulting product will be a cluster action plan that can be put into effect and will provide for ongoing evaluation of mission focus and disciple-making activity,” Archbishop Lori writes.
Pastors react
Father John Ward, pastor of St. Francis de Sales in Abingdon and Prince of Peace in Edgewood, is a fan of the collaborative style.
“The two parishes are enjoying one another’s company,” Father Ward said, noting that parishioners from St. Francis had come out for Prince of Peace’s annual “Fiesta,” and parishioners of Prince of Peace had recently enjoyed a spaghetti dinner at St. Francis.
“I told everybody that the parishes are now related through me,” he laughed.
Monsignor Jay O’Connor, pastor of Our Lady of the Fields in Millersville, also praised the “spirit of communio.”
“This is not about the survival of one parish,” he said. “It is about how we will thrive together in the mission of Christ. It is important that the archbishop has invited all archdiocesan parishes, schools and institutions to participate in the process together.”
Monsignor Thomas L. Phillips, pastor of St. Gabriel in Woodlawn, noted that his parish shares a Hispanic celebrant and combines pastoral council training and retreats with St. Clement I in Lansdowne.
In an email, Monsignor Phillips wrote that “an inviting family atmosphere” is a critical tool for evangelization. On the first Sunday of the month, St. Gabriel offers a bilingual and age-appropriate family program, he said, in which older children and young adults mentor the younger groups in a peer-ministry model.
Monsignor Phillips said that the church’s stand on family issues including marriage, reproduction and the “long and complicated annulment process,” might encourage some to “seek other groups for spiritual nourishment.”
Therefore, “while we should continue to teach Gospel values,” the monsignor said, “mercy needs to be the medicine that brings healing” and helps create missionary disciples.
Father Gerard Francik, pastor of St. Mark in Fallston, stressed the importance of walking “the fine line of being welcoming while challenging,” or encouraging Catholics to participate fully rather than seeing the church only as “being there when they’re ready.”
Archbishop Lori stresses in his pastoral that pastors and parishes will be the initial movers of the process.
“For the Church to chart a course that will address the pastoral needs of each community in a way that advances the spread of the Gospel, there needs to be a clear understanding of each parish community,” he writes.
See also:
Bus pilgrimage tickets for papal Mass on sale June 29
Archbishop Lori begins Fortnight for Freedom with Gospel connection
PrevNext