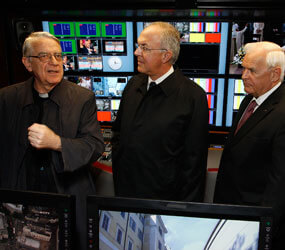 VATICAN CITY ¬ Looking at the centuries-old buildings and palaces, not many people would know that the Vatican has become a techie paradise, a wonderland of modern equipment and know-how.

For instance, the Vatican Library is using NASA technology to digitize its treasures, according to some of the latest facts listed in the “The Activity of the Holy See: 2010,” a yearbook published by the Vatican in September.

The library is using the format to digitize some 80,000 manuscripts because the files will be readable long into the future, avoiding the risk of the technology becoming obsolete, the yearbook said.

The Vatican Library reopened in 2010 completely revamped with Wi-Fi for scholars and visitor badges tagged with RFID tracking chips. The radio frequency identification chips are already embedded in many of the library’s open holdings so volumes can be found and re-shelved more easily.

The Vatican’s 1,343-page yearbook for 2010 is filled with reports on the day-to-day activities as well as special projects begun or completed by every Vatican congregation, council, commission and office.

The book says that the Swiss Guards, equipped with historic halberds, are now trained in the latest in personal defense techniques.

All 110 soldiers took a course last year in the Monadnock Defensive Tactics System, self-defense strategy developed in the United States for security officers to “to control and stabilize” unarmed and noncompliant aggressors.

Perhaps it’s not a coincidence the new blocking, restraining and counterstrike skills training came after 2009, 2008 and 2007 saw incidents of people jumping barricades and lunging at the pope.

Vatican Radio is often on the forefront of experimenting with new technologies, and 2010 was no exception. The yearbook said the radio began switching to new digital audio broadcasting methods called DRM, T-DAB and T-DMB, saying the systems “may become powerful channels of communication in the future.”

Vatican Radio launched its Twitter feed in different languages in 2010 and, together with the Vatican Television Center, it launched a new “smooth streaming” service of live high-definition video broadcast of papal events via select Vatican websites and the iPhone.

Thanks to the generosity of the Knights of Columbus and a discount from Sony, the Vatican Television Center added high-definition cameras and a state-of-the-art mobile television studio to its fleet in 2010.

The yearbook reported that the major overhaul of its telecommunications infrastructure begun two years ago is proceeding successfully. A high-speed fiber optic network is being installed over some 250 miles, and the Vatican telephone system is using Voice over Internet Protocol for the delivery of voice and multimedia over the Internet.

But some of the technological improvements listed in the yearbook feel more like it’s 1999, not the 21st-century.

For example, smoke detectors, fire alarms and high-resolution surveillance cameras that switch on in case of fire were installed in St. Peter’s Basilica’s sacristy and choir chapel. These two areas are particularly prone to fire, the book said, because of their wood furnishings, flammable materials and the use of candles and incense.

Air-conditioning was expanded to more areas of the Vatican, and the use of ozone-depleting refrigerants was reduced.

Up-to-code electrical wiring and new lighting were installed throughout Vatican City State and its extraterritorial properties like the papal villa at Castel Gandolfo.

The pope’s summer villa in Castel Gandolfo got a hydraulic elevator that can carry up to nine people or 1,500 pounds.

Some 130 feet of old water pipes were ripped up inside Vatican City and replaced with polypropylene tubing.

The Vatican Secret Archives backs up all of its files as well as digital reproductions on LTO4 tape ¬ a magnetic tape data storage technology from the late 1990s ¬ as well as on hard drives, CD-ROMs and DVDs.

The Vatican printing press, which is responsible for printing everything from the Vatican newspaper to books, calendars and business cards, bought a new offset printing machine in 2010, but it said it has plans to buy a digital printing press in the future and to refurbish its rotary press.

The Vatican’s photo service archive is in dire need of modern storage and preservation, the yearbook said, and some negatives risk ruin. The service will eventually purchase two scanners to begin digitizing, archiving and preserving its collections, it said.

Some Vatican departments had mailing-list software or private domain office email installed. The Vatican Museums set up an e-commerce platform, and the Pontifical Council for the Laity’s website was enabled with a Web Content Management System.

The Vatican gardeners even invested in a large wood chipper and mulching blades for the lawnmowers, which significantly reduced the bulk and cost of hauling away yard waste, the yearbook said.

But the trend toward modernity doesn’t mean everything has been modernized.

About a dozen nuns who are members of the Pious Disciples of the Divine Master work the switchboards 24 hours a day, and last year they handled 315,160 calls.

The altars, confessionals and pews in St. Peter’s Basilica are still dusted and cleaned daily by hand.

And the pope’s cows at Castel Gandolfo provide not just organic milk, but also the natural fertilizer for the papal farm, the yearbook said. A manure spreader was even purchased in 2010 to make the job go smoothly.