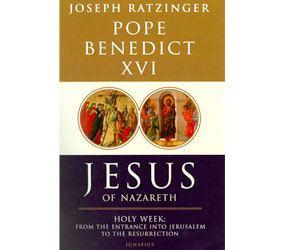 VATICAN CITY – In his new volume on “Jesus of Nazareth,” Pope Benedict XVI presents the passion and resurrection of Christ as history-changing events that answer humanity’s unceasing need to be reconciled with God.

The 384-page book, titled “Jesus of Nazareth: Holy Week – From the Entrance Into Jerusalem to the Resurrection,” was officially released March 10. The pope had worked for several years on the text, the second in his series exploring the main events of Jesus’ public ministry.

The Vatican said 1.2 million copies of the book had already been published in seven languages, and that an e-book version was also planned.
In a foreword, the pope said he did not set out to write another chronological “Life of Jesus,” but instead to present the figure and message of “the real Jesus” – not a political revolutionary and not a mere moralist, but the son of God who inaugurated a new path of salvation based on the power of love.

Through his sacrifice on the cross and his institution of the church, Jesus carried out a universal mission: “leading the world away from the condition of man’s alienation from God and from himself.” It’s a mission that continues today, the pope wrote.

“Is it not the case that our need to be reconciled with God – the silent, mysterious, seemingly absent and yet omnipresent God – is the real problem of the whole of world history?” he said.

The book analyzes the key events of Jesus’ final days, including the cleansing of the temple, the Last Supper, his betrayal, his interrogations before the Sanhedrin and Pontius Pilate, his crucifixion and his appearances to the disciples after his resurrection.

Throughout the text, Pope Benedict examines the scriptural interpretation of early church fathers and contemporary scholars, rejecting some arguments and affirming or elaborating on others. Prominently cited was Rudolf Bultmann, the late 20th-century German Protestant scholar of the New Testament.

The pope said it was important to understand that the events recounted in the Scriptures are historically grounded and actually occurred and are not simply stories or ideas. For example, he said, if Jesus did not actually give his disciples bread and wine as his body and blood at the Last Supper, then “the church’s eucharistic celebration is empty – a pious fiction.”

Likewise, he said, Christ’s actual resurrection from the dead is foundational for the church. Without it, he said, “Christian faith itself would be dead.”

At the same time, he acknowledged that the historical record about Jesus is not always complete and said that “if the certainty of faith were dependent upon scientific-historical verification alone, it would always remain open to revision.” He took issue with the “historical Jesus” movement in scriptural scholarship, saying it has “focused too much on the past for it to make possible a personal relationship with Jesus.”

The pope took critical aim at scholars who have interpreted Christ’s passion in political terms and sought to portray Jesus as a “political agitator.” On the contrary, the pope wrote, Jesus inaugurated a “nonpolitical Messianic kingdom” in a world where the political and the religious had been inseparable.

“This separation – essential to Jesus’ message – of politics from faith, of God’s people from politics, was ultimately possible only through the cross. Only through the total loss of all external power, through the radical stripping away that led to the cross, could this new world come into being,” he said.

The pope said that “violent revolution, killing others in God’s name” was not Jesus’ way.

“He does not come bearing the sword of the revolutionary. He comes with the gift of healing,” he said.

The book generally steered clear of commentary on contemporary issues, but on the issue of nonviolence, the pope added that “the cruel consequences of religiously motivated violence are only too evident to us all.”

“Vengeance does not build up the kingdom of God, the kingdom of humanity. On the contrary, it is a favorite instrument of the Antichrist, however idealistic its religious motivation may be. It serves not humanity but inhumanity,” he said.

Previously released excerpts from the book emphasized that Jesus’ condemnation and death cannot be blamed on the Jewish people as a whole. The same chapter said Jesus’ trial before the Roman authorities raised the question – which is still being asked today – of whether politics can accept “truth” as anything but a subjective reality.

The book’s final chapter examines the resurrection from the dead as “the crucial point” of Jesus’ life. Without the resurrection, the pope said, Jesus would be merely “a failed religious leader.”

The pope said some of the strongest evidence for the authenticity of the resurrection was to be found in the Scripture accounts of the disciples’ encounters with the risen Christ. Jesus is presented as being present physically, yet not bound by physical laws, and is not immediately recognized. All of this is presented “clumsily” in the Gospel narratives, which make them all the more credible, reflecting the disciples’ genuine amazement, he said.

After his resurrection, Jesus was not a “ghost” or a mere “resuscitated corpse,” but one who has entered a new life in the power of God, the pope said. This comes through clearly in the Gospel accounts, he said.

The pope then asks whether modern men and women can put their faith in such testimony. “‘Enlightened’ thinking would say no,” he said. Science would seem to rule it out – but science has its limits, he said.

In fact, he said, the resurrection does not contradict science but speaks of something outside our world of experience, a further dimension. He then posed a series of questions to underline that a “new dimension of reality” should not be rejected out of hand by modern thinking.

In essence, he said, Jesus’ resurrection made that leap, “creating for all of us a new space of life, a new space of being in union with God.” As such, the Resurrection was an event that broke out of history yet “left a footprint within history,” he said.

In a brief epilogue, the pope looked at the ascension of Christ into heaven, a concept that may be difficult for people to understand, he said. With the ascension, Jesus’ presence with God is not “spatial” but divine.

“The departing Jesus does not make his way to some distant star,” he wrote. “Ascension does not mean departure into a remote region of the cosmos.”

In joining God his father, Jesus “has not gone away but remains close to us,” accessible throughout history and in every place, the pope said.

Christians believe that Christ will return and restore justice in a final triumph of love, he said. In the meantime, what is required of Christians is vigilance – which means, first of all, “openness to the good, to the truth, to God, in the midst of an often meaningless world and in the midst of the power of evil,” he said.