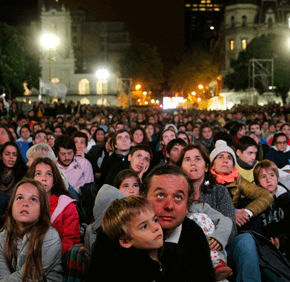 BUENOS AIRES – Rafaela Gonzalez spent the wee hours of March 19 watching the installation of the first Argentine pope on the big screens outside the city’s cathedral. She spoke with admiration about Pope Francis, with disdain for the country’s political picture and with concern for the church in a country with an overwhelmingly Catholic population, but a flock moving further from parishes, priests and church practices.

“It’s a very superficial Catholicism” in Argentina, said Gonzalez, a nurse and a member of the Schonstatt Sisters of Mary, a secular institute. “We have catechism classes, but it has not done a lot to deepen the faith.”

Her concerns and complaints cut to the reality of a country where the majority claims to be Catholic, pride for the pope is common and questions persist about the church’s role during the 1976-1983 military dictatorship.

Many Argentines confirmed that Catholics participate in pilgrimages and celebrate their patron saints — especially St. Cajetan and Our Lady of Lujan, the national patroness — but do not attend Mass or get involved in parish life. Increasing numbers of Argentines profess no religious affiliation, and evangelical and other Christian confessions have gained ground.

In Argentina, the world’s eighth-largest country geographically, rural regions and the provinces are considered more Catholic than the capital. But even in the outlying areas, “there’s been a decline in participation for Mass and patron saint holidays,” said Gustavo Loza, spokesman for the Archdiocese of Cordoba, northwest of Buenos Aires.

Clergy in the provinces are perceived to be on friendlier terms with the current administration of President Cristina Fernandez de Kirchner, said Jose Maria Poirier, director of the Catholic magazine, Criterio.

“On the whole the bishops’ conference isn’t in agreement with Cristina; in some provinces there are bishops who have received (federal) help for Caritas and get along well with the government,” Poirier said.

Many Argentines approach religion in a nonpolitical way and participate in popular expressions of faith — something Pope Francis embraced.

“Many people will participate in pilgrimages” and patron saint celebrations, “but not Mass,” said Father Jose Maria di Paola, who works with drug addicts in the shanties of Buenos Aires.

“They have a simple faith,” added Father Martin Carrozza, another priest working in the shanties, where he says priests have adjusted to accommodate the Catholic customs brought by large populations of Bolivians and Paraguayans.

The number of Argentine Catholics who regularly attend Mass is unclear, although Gabriel Castelli, member of the board of directors at the Pontifical Catholic University of Argentina, estimated the number at 15 percent. The government’s Center for Labor Studies and Investigations’ survey found 23.8 percent of Argentines professing a religious faith regularly attended services.

A 2008 survey by the labor studies center showed 76 percent of Argentines saying they were Catholic. Some 11.3 percent of the population identified as atheist, agnostic or holding no religious beliefs in 2008; 9 percent were evangelicals.

Norberto Padilla, professor of constitutional law at the Pontifical Catholic University of Argentina, said the numbers of nonreligious are more pronounced in the populous capital and are equal among the well-educated and those with little education.

“There was has been a decline in the enthusiasm for religion,” he said. “People don’t marry in the church as much, don’t baptize their children.”

The Catholic Church still holds a privileged position in Argentina; it is even mentioned in the constitution. Each May, for the national holidays, government leaders attend special Masses celebrated by bishops.

Advocates for a more secular state want that to stop. They also objected when schools closed March 19 for Pope Francis’ installation. And the approval of sex-same marriage laws, despite church opposition, “was widely supported,” said independent political analyst Sergio Berensztein.

A tense atmosphere persists — and the church and its role in present-day Argentina “cannot be separated from the cultural-political context,” said Father Jose Maria Ruiz Diaz, pastor of St. Benedict the Abbot Parish in the affluent Belgrano district of Buenos Aires.

The complaints and opposition to contentious social policy changes speak to the hierarchical church’s position in the Argentina of recent years: a political position — even though Catholics work with the poor and provide schooling and social assistance in areas where the state is absent.

It’s reflected, too, in the allegations — often from pro-government publications — that Catholic bishops stayed silent or, in some cases, acted complicity with members of the military dictatorship.

Jaqueline Campbell Davila, former spokeswoman for the Mexican Diocese of Saltillo, is a practicing Catholic who spent three years working on a graduate degree in human rights at an Argentine university. She said twice she was “run out of classes” for being Catholic — a reflection of the perceptions among critics and families who had loved ones abducted “that the church was at the right hand of power.”

But some Catholics hope the elevation of Pope Francis will bring Argentines back to the church.

“There’s been a renewal of enthusiasm,” said Guillermo Galeano, spokesman for the Diocese of Lomas de Zamora in suburban Buenos Aires. Priests, he said, have noticed increased attendance at Mass since Pope Francis’ election.

Father Ruiz has noticed the same and expressed the hope, “Maybe this brings a revival.”

Pope expresses his closeness to victims of flooding in Buenos Aires

New pope inspired her faith, says Baltimorean who knew him in Argentina as teen