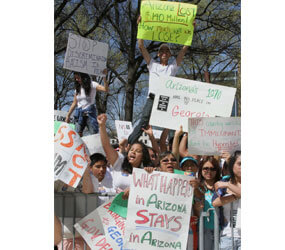 WASHINGTON – With a politically divided Congress putting immigration on the don’t-even-bother list of stagnate legislation, action on the subject in 2011 fell to state legislatures and federal courts – where challenges focused on whether states have the right to act on immigration.

Between court cases and election-year rhetoric, however, 2012 promises to give the issue a much higher profile.

The Supreme Court agreed Dec. 12 to consider the constitutionality of Arizona’s S.B. 1070 – a package of restrictions on immigrants and requirements for law enforcement officers to determine people’s immigration status – which was to have taken effect in summer of 2010.

Injunctions have blocked some of the most-criticized parts of the law, including mandatory requirements for police to check on immigration status and criminalizing various forms of assistance to undocumented immigrants.

That includes the response to a lawsuit filed by the Department of Justice challenging the state’s right to step into immigration law, normally the purview of the federal government. The 9th U.S. Circuit Court of Appeals in April upheld the federal District Court’s prohibition on parts of the law from taking effect. That set up the state’s appeal to the Supreme Court.

That case will likely be heard by the court in April, with a ruling expected by the time the court adjourns for the summer.

The major Republican candidates for president have largely staked out positions in favor of strong enforcement and calling any possibility of a path to legalization for the undocumented immigrants already in the country “amnesty.”

Although former Massachusetts Gov. Mitt Romney previously has supported broader immigration proposals, he recently has taken a firm line against possible legalization and opposes in-state tuition for young adults brought here illegally as children – a component of the perennial legislation known as the DREAM Act.

His fellow Republican, former House Speaker Newt Gingrich, said in one candidates’ debate: “I don’t see how the party that says it’s the party of the family is going to adopt an immigration policy which destroys families that have been here a quarter-century. And I’m prepared to take the heat for saying, let’s be humane in enforcing the law without giving them citizenship but by finding a way to create legality.”

Meanwhile, the legal battle faced in Arizona hasn’t stopped other states from passing their own laws, but their most dramatic provisions also have been blocked by courts. Nevertheless, their effects have been felt broadly.

In Alabama, for example, farmers complained that they lost millions of dollars worth of produce that rotted in the fields after many farmworkers moved out of state – including some who are in the United States legally but feared being profiled.

The arrests of a German Mercedes-Benz executive and a Japanese Honda employee, both in the U.S. legally – and whose companies have auto plants in Alabama – underscored the problems with a law that mandates arrests in a wide range of situations. Charges against both men were dropped but not before the arrests were publicized worldwide.

Repercussions included high rates of absenteeism in Alabama schools, even among U.S. citizen children, as parents sought to keep a lower profile, or pulled out their kids and moved to another state. A provision that said municipal utility companies could require proof of legal residency led to some people being unable to get water or electricity service.

In addition to Alabama, Utah, Georgia, Indiana and South Carolina adopted wide-reaching laws, all of which have been challenged in court. The Justice Department is among those suing to stop the laws in Alabama, South Carolina and Utah.

Several were modeled on Arizona’s law, others attempted to ease pressures on undocumented immigrants. For example, Utah’s law included provisions for local enforcement of immigration laws, but also would seek a federal waiver to create a state work-permit program for which people already in the state could apply.

For its part, the Obama administration continued to voice support for comprehensive reform but began to enact some changes in how government agencies deal with undocumented immigrants.

This summer, the director of Immigration and Customs Enforcement told field officers to prioritize apprehension and deportation of immigrants with criminal records or repeat offenses. Homeland Security Director Janet Napolitano followed up in August with orders for prosecutorial discretion in weeding out low priority cases and giving those people a chance to remain in the country.

That policy has been slow to be implemented, according to critics, including Rep. Luis Gutierrez, D-Ill., who regularly chides the administration over how it handles immigration cases that fall within administrative discretion.

In an October press release, for example, Gutierrez noted that the U.S. was deporting the maximum number of people the system can handle – 400,000.

“The percentage of criminals among the deportees has risen during the Obama administration,” the release said. “But let’s be clear, we are still deporting a large number of parents, workers, and others who pose no threat to this country and who contribute to our economic well-being as a nation.”

Grass-roots efforts for comprehensive immigration reform continued around the country.

In December, Mercy sisters in eastern Iowa bought space on a billboard proclaiming the passage from Matthew: “I was a stranger and you welcomed me.” The word “stranger” is crossed out and the word “immigrant” is inserted.

A Dec. 12 message to undocumented immigrants from the U.S. Hispanic and Latino Catholic bishops offered words of encouragement. “You are not alone,” they said, adding that they “open our hearts and arms to you” as children of God.

Iowa’s compact, in its early stages of circulation, also calls for federal solutions, “smart enforcement,” keeping families together, and meeting economic needs of a state with a rich culture.