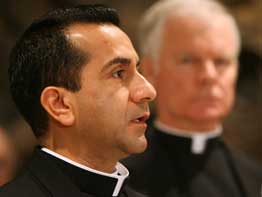 CHICAGO – Responding to what they called the increasingly harsh political rhetoric directed at undocumented immigrants, Priests for Justice for Immigrants held a Dec. 18 press conference to mark International Migrants’ Day with a pastoral “invitation and challenge” to the people of the Archdiocese of Chicago.

“Society has taught us that we need an enemy,” said Father Larry Dowling, pastor of St. Agatha Parish on Chicago’s West Side, “and that enemy has come more and more to be the undocumented.”

Crowded around the altar in a small chapel at Holy Name Cathedral in Chicago, the priests, along with members of Sisters and Brothers of Immigrants, said the church has a duty to stand up for the dignity of all people.

They also emphasized how Americans benefit from the presence of immigrants – with documents or not – while at the same time putting them in danger of being torn from their families.

It was part of an advocacy effort that began in 2005, when the U.S. Conference of Catholic Bishops called on all Catholics to advocate for just and compassionate reform of the U.S. immigration system, said Father Marco Mercado, pastor of Good Shepherd Parish in a neighborhood known as Little Village.

Fathers Mercado and Dowling and other priests who participated said they felt compelled to continue speaking out.

“So much of our society is driven by darkness and fear,” said Dominican Father Brendan Curran, pastor of St. Pius V Parish in the Pilsen neighborhood. “Hate groups are on the rise. More municipalities have passed legislation against undocumented immigrants. Deportations are ramping up.”

The targets of “mean-spirited pundits” include people like Adriana, a young woman who lit one of the candles on the Advent wreath. In August 2006, her mother died at Cook County Hospital after being poisoned by a cactus wound in her foot she sustained while crossing the border, Father Curran said.

Asked whether the church would suffer from anti-immigrant backlash because of the group’s stance, Father Dowling said he doesn’t think the church will suffer any more than other groups that advocate for immigrant rights.

Even if it did, it wouldn’t matter, he said.

“It’s our duty to do that,” he said. “In faith, we believe every person deserves that dignity.”

To express solidarity with those facing deportation, members of Sisters and Brothers of Immigrants have been praying the rosary at 7:15 a.m. Friday mornings outside a detention and staging area of Chicago Immigration and Customs Enforcement. They also watch deportation court proceedings.

Priests for Justice for Immigrants will work with other community groups to offer workshops on the rights of people caught in raids at their homes or workplaces, said Father Don Nevins, pastor of St. Francis of Assisi Parish in Chicago.

“Just because you are undocumented doesn’t mean you have no rights,” Father Nevins said.

All of the priests said they would continue to pray and educate their congregations about immigration issues and work to foster relationships between immigrants and nonimmigrants.

More than 60 parishes in the Chicago Archdiocese had scheduled processions called “posadas,” which is Spanish for lodging. The processions re-create Mary and Joseph’s search for lodgings and are another way to advocate for immigration reform.

In Los Angeles, an evening prayer service at Dolores Mission Church included personal testimonies of migrants to the United States, as well as a Christmas “posada” re-enactment.

Participants at the prayer service also joined in a group photo, which was to be sent in the form of a Christmas card to the Democratic and Republican presidential candidates to remind them that the issue of comprehensive immigration reform is not dead in the hearts of the Catholic community.

“International Migrants’ Day provides us a wonderful opportunity to pray that our nation embraces more deeply its immigrant identity, and to call on the presidential candidates to support immigration reform that is just, humane and comprehensive,” said Father Scott Santarosa of Dolores Mission Church.