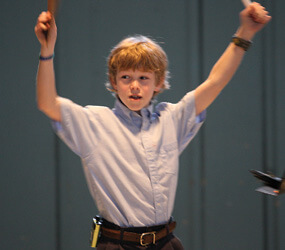 Lucas Dernetz might not be former New York Jets quarterback Joe Namath yet, but he’s pretty good at following through on guarantees.

The day he found out his school was holding a Spanish spelling bee April 9, the Immaculate Heart of Mary School, Baynesville, sixth-grader walked around his house saying one thing: “I’m going to be in the Spanish Bee and maybe I’ll beat all the eighth-graders!”

Although he was probably not the “favorito” entering the contest, he spelled the word correctly in the Spanish alphabet to win his school’s first Spanish Spelling Bee over 26 other sixth, seventh and eighth-grade students.

Spanish teacher Eileen Phelps organized the event and believes it is the first of its kind in Maryland. Mixing the use of English and Spanish, the bee allowed students to spell out Spanish words in both alphabets.

When Ms. Phelps handed the winner his trophy, fifth- through eighth- graders sitting in the school’s gymnasium greeted him with deep chants of “LUUUUUUUUUUUKE!”

Parents and family members applauded as all of the participants took a bow as well.

Principal Amy Belz, a former Spanish teacher, watched on with pride. Now in her first year at Immaculate Heart of Mary, she said the integration of the foreign language is vital.

“Once they can latch on to those Latin root words, it really opens a lot of doors,” she said. “As they go on to high school, they’ll really have a leg up on other students. This was thrilling.”

Ms. Phelps teaches Spanish twice a week to sixth- through eighth- graders. She added Lucas, only in his first year of learning the language, has taught his younger sister how to pray in Spanish.

“You know they like it when they’re teaching their siblings,” she said with a laugh.

Second-place finisher Lukas Mueller and third-place Maria Noto pushed Lucas to the brink. The experience also allowed them to work out any public speaking fears.

“I was shaking,” Maria, a seventh-grader, admitted

Lukas Mueller said he will use the language confidently “if I go to Spain or Mexico.”

Ms. Phelps said there is also something larger at play.

“My underlying purpose is to promote cultural understanding,” Ms. Phelps said. “Once they understand how they are different, they start to see how similar they are. My ultimate goal is a more peaceful world.”

For one day, it was a happier one for Lucas. His mother ran her hands through her son’s blond hair, telling him it was “amazing” to watch his victory.

Lucas held out his trophy and replied, “I’m the first ever Spanish Bee champion!”