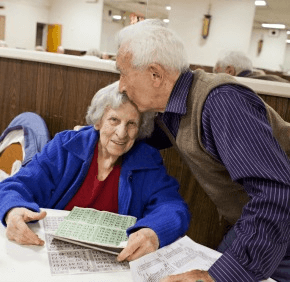 By Elizabeth Lowe
elowe@CatholicReview.org
TOWSON – Oscar Sinibaldi lovingly stroked the arm of his wife, Mary, as they recounted a marriage that has spanned three quarters of a century.
“We’re in love,” Oscar, 97, said repeatedly.
The couple, parishioners of Immaculate Heart of Mary in Baynesville since 1965, celebrated their 75th wedding anniversary April 16.
After dating for two years, Oscar and Mary were married by a priest in secret – there were no witnesses – in Union City, N.J., in 1939. They did not announce their nuptials. It was during the Great Depression, and without the money to start a household, they lived separately, with their respective parents.
“We had no place to go,” said Mary, 94.
Six months later, the same priest presided at another ceremony for Oscar and Mary. This time, guests were invited.
Ten months later, the first of their four children was born. They gave them seven grandchildren and two great-grandchildren. Two of their children and a granddaughter are deceased, and the Sinibaldis said their faith has carried them through the good times and bad, and has helped their marriage endure.
“Without it (faith) we’d be lost,” Mary said.
“If anything, things like that (the deaths of family members) strengthened it,” Oscar said. “The most important thing is maintaining your faith.”
Kellie Sinibaldi married their son, Alan. She said her in-laws are examples for the family.
“They unconditionally love all of us,” said Kellie, whose family worships at Church of the Nativity in Timonium. “They’ve given me support and love and showed us the importance of maintaining a strong faith.”
Oscar and Mary kept their faith and marriage strong, even when Oscar joined the U.S. Army Air Corps during World War II. He served as a bombardier navigator on the B-17 Flying Fortress from 1944 to 1945.
“I wrote him every day,” said Mary, a homemaker.
After completing his military service, Oscar returned to work with Keuffel and Esser Company, a New Jersey-based drafting instrument and supplies company. K&E was acquired by AZON Corporation in 1987.
In 1964 the family relocated to Baltimore. Later, Oscar’s 45-year career with K&E took him and Mary to San Juan, Puerto Rico, where they lived from 1972 to 1982.
Oscar is a member of the Holy Name Society, Retired Officer’s Club and Veterans of Foreign Wars. He bowls every Wednesday evening in an area duckpin league at AMF Towson Lanes.
Together, Mary and Oscar have enjoyed dancing, golf and traveling to Greece, Germany, Switzerland, Israel, France and Italy. They play bingo each week at VFW Post 9083 in Parkville.
Oscar, who enjoys cooking, makes breakfast for Mary every morning in the kitchen of the home they purchased 50 years ago.
“For me, as an Italian, cooking is a normal thing,” he said. “I feel at home cooking. I always have.”