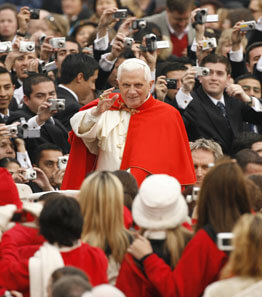 It is by staying humble that “the Christian can enter into a relationship with the Lord,” he said.
During his Nov. 21 general audience in St. Peter’s Square, the pope focused his catechesis on Aphraates, “an outstanding figure of fourth-century Syriac Christianity.”

This early Christian theologian said “Christian life is centered on imitating Christ, taking up his yoke and following him on the path of the Gospel,” the pope said.

The most essential virtue for a disciple of Christ is the virtue of humility, he said.

He said Aphraates wrote that “if a person’s roots are planted in the earth, his fruits rise up before the Lord.” While the humble person remains grounded, his heart soars toward heaven, he said.

Pope Benedict quoted the fourth-century sage: “God comes close to the person who loves, and it is right to love humility and stay in a condition of humility.”

Aphraates often depicted Christ as a doctor and sin as a wound that could be healed only through penance, the pope said.

A person who sins and is in need of forgiveness should not hesitate to seek help, the pope said.

A strong faith in God creates in the individual “a temple where Christ himself lives,” he added.

“Therefore, faith makes sincere charity possible that one expresses through love toward God and toward one’s neighbor,” he said.

True prayer happens “when Christ is living in the heart of a Christian” who is invited to dedicate himself toward helping those in need, Pope Benedict said.

Aphraates taught that prayer is also visiting the sick and offering comfort to the distraught, he said.
“Let us strive to show charity and forgiveness to all so that our prayers may be ‘strong with the strength of God,’“ the pope said.

The text of the pope’s remarks in English is available online at:
https://www.vatican.va/holy_father/benedict_xvi/audiences/2007/documents/hf_ben-xvi_aud_20071121_en.html.