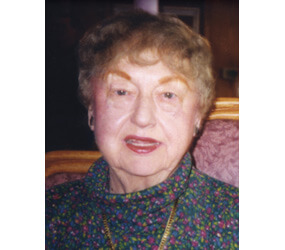 WASHINGTON – Before her death in October 2008, Alyce Christopher was a familiar face at St. Mary Nativity Parish in Joliet, Ill.

Father Chris Groh, the pastor, said she was always around to lend a helping hand at women’s club bake sales or senior citizens’ events. In her younger years, he said, she was very involved in the parish’s school. But no one suspected that her helping hand would be so generous.

On June 11, the parish announced that Christopher had left $2 million to St. Mary Nativity. Parishioners often bequeath money to the church in their wills, Father Groh said, but Christopher’s gift dwarfs the next largest donation in his memory, which was $240,000.

Christopher was a lifelong member of the parish. She was baptized, confirmed, and married there, and graduated from the parish school’s eighth grade in 1934. She went on to high school at St. Francis Academy, the Catholic girls’ school in Joliet at the time.

Although technically Christopher left her estate to the parish in general, Father Groh said that “her intent verbally was to benefit the school.”

He recalls one incident more than 10 years ago when she mentioned a dream she had about giving a million dollars to the school.

“She kind of smiled and said, ‘Father, if you had a million dollars, what you would do with it?’” Father Groh remembered in a June 15 telephone interview with Catholic News Service.

He said he told her that kind of money could provide St. Mary Nativity’s students with new insights and opportunities they otherwise wouldn’t have had.

A few years ago, St. Mary Nativity moved its preschool and kindergarten programs to a four-room school building just two blocks down the street at Holy Cross parish. The move not only returned students to the Holy Cross school, which had been vacant for some time, but freed up space in the St. Mary Nativity building for computer labs, art classrooms, and an expanded library and media center.

Now that Christopher’s dream is reality – but with $2 million, not just one – Father Groh said the donation will have both immediate and long-term effects at both campuses.

“Some of it will be used as endowment,” Father Groh said, but the parish also will look and see what areas of the school need help. That could involve purchasing technology equipment for science labs and classrooms. The endowment will likely fund future scholarships, which now assist a dozen of the school’s 135 students.

Although Christopher left her estate to St. Mary Nativity at her death last October, the parish didn’t have a grasp of the exact dollar amount until December. The final tally was staggering, Father Groh said, especially because no one knew Christopher as a particularly wealthy woman.

Christopher’s late husband, Ralph, worked at a nearby Texaco refinery, and she was a secretary at U.S. Steel in Joliet until she retired. Their one luxury might have been their Kankakee River cottage, which she sold not long after Ralph’s sudden death in 1986. The couple never had children.

“They were common people with a very simple lifestyle,” Father Groh, who has been at St. Mary Nativity Parish since 1989 and the pastor since 1999. “They worked in the same places that everybody in the parish worked. There was nothing to say they were extraordinary.”

The Christophers were very frugal and lived simply, which Father Groh thinks led to Alyce Christopher being able to give so much money to the parish.

“It was a shock for everybody to realize how much she was able to leave because of wise decisions about her investments,” Father Groh said. “I wonder whether she really comprehended how much she really had there.”

It seems fitting that Christopher, who was without any surviving children or close relatives but was an active member of her community, would leave her estate to her parish.

“Her neighbors as well as the parish became her family,” Father Groh said. He explained that when neighbors became seriously ill, she would sometimes take care of the sick person so the family could run errands or just have a rest.