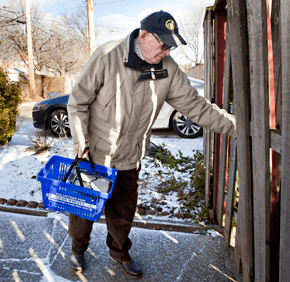 PARKVILLE – Joe Manz retired 16 years ago, but he has not slowed down.

The 79-year-old parishioner of Immaculate Heart of Mary, Baynesville, volunteers at IHM’s food pantry under St. Vincent de Paul, is a member of the parish money counting team, an usher and attends daily Mass.

On Fridays, Manz drives a fellow IHM parishioner – a woman in her late 80s – to Faith Presbyterian Church in Northwood where they volunteer with Meals on Wheels. The duo delivers food to homes in the Baltimore area.

“They really need volunteers,” Manz said. “There’s so many more people who are living longer. It’s a shame they can’t get more people to give up their time.”

Until last year, Manz also volunteered at a Parkville nursing home. The self-proclaimed “history buff” – he has about 150 history books in his library – is a former Maryland Historical Society docent.

He plans to continue volunteering “as long as I’m relatively healthy.”

“One of my mottos is ‘do what you can,’ ” Manz said, sitting at his dining room table wearing glasses, a wool sweater and brown corduroy pants. “I cannot sit home and watch the tube.”

Garrett Brown, director of outreach ministries at IHM, described Manz as “a good, hard worker, one of my best volunteers.”

Father Michael W. Carrion, pastor of IHM, said Manz is “someone who shows a lot of concern for others.”

“It’s always very inspiring to see people who are willing to reach out and do so much, especially to help others,” Father Carrion said, “especially with the nursing homes and St. Vincent de Paul. The kind of service he does is to directly help other individuals and that’s a really important thing.”

Manz credits his attitude toward service to his Catholic schooling. He attended the former parish school of St. Bernardine in Baltimore, Mount St. Joseph High School in Irvington and Loyola University Maryland in Baltimore.

“I had a Catholic education for 16 years,” Manz said. “I felt like I wanted to give a little back, do my share and help out a little bit. I’ve always tried to help people out.”

Manz and his wife of 45 years, Ann Marie, volunteered together over the years. She died of pancreatic and liver cancer in 2007.

Manz enjoys traveling and has visited 17 countries, some of which he voyaged to after being drafted to the U.S. Army in 1956. He was stationed in Europe and honorably discharged as a specialist third class in 1958.