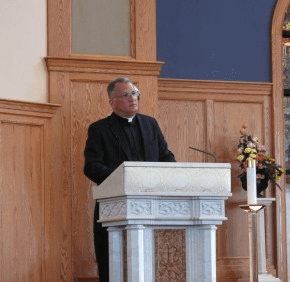 By George P. Matysek Jr.
gmatysek@CatholicReview.org
Twitter: @ReviewMatysek
LIBERTYTOWN – For nearly an hour, more than 200 people from across the Archdiocese of Baltimore knelt in silent prayer in front of the Blessed Sacrament at St. Peter the Apostle Church April 28.
With eyes focused on a consecrated host held inside an ornate monstrance on the altar of the Frederick County church, worshippers asked God to help more men and women answer the call to religious life. The prayer gathering was the pinnacle of a half-day vocations summit called by Archbishop William E. Lori to discuss ways of promoting vocations.
“If we want priestly vocations, it only makes sense that all of us, no matter our calling in life, should spend time – good and generous amounts of time – in eucharistic adoration so that we can truly absorb the deep truth and meaning of Jesus’ gift of self in the Eucharist,” Archbishop Lori said. “If we want vocations, we’ve got to pray for them.”
Archbishop Lori encouraged priests to offer eucharistic adoration as much as they can and to work to “create vibrant eucharistic communities out of which vocations will come.”
Noting that he frequently sees young people spending time in prayer in front of the Blessed Sacrament, Archbishop Lori called eucharistic adoration a “rare moment” when people can “unplug from daily life.”
“We stop looking at emails, Instagram, Facebook and our Twitter account,” he said. “Instead of connecting electronically, we connect spiritually with the One who loves us with an everlasting love, the One who knows us, loves us and walks with us in our daily life.”
The archbishop observed that the priesthood is intrinsically connected to the Eucharist. He recalled attending a synod of bishops on vocations, during which a young African theologian said words the archbishop constantly found himself pondering: “Priests, your name is Eucharist.”
“He went on to say the priesthood was established by Jesus on the same night as the Eucharist, at the Last Supper,” Archbishop Lori said. “The source of the priest’s vocation is the Eucharist and it is the summit of his ministry.”
During his keynote address, Father Brian M. Doerr, vice rector for human formation at Mount St. Mary’s Seminary in Emmitsburg, said young people today are just as eager to serve the church as they were 100 years ago. They need encouragement to discern God’s call, he said.
“Discernment is finding the courage to do what God is calling them to do,” said Father Doerr, former vocations director for the Diocese of Lafayette, Ind.
Father Doerr said there is really only one Christian vocation: “responding to God’s generous love by living a life of God.” That message is often confounded by modern culture and media that emphasize the self above others, he said.
“We need to tell young people God expects much of them,” Father Doerr said. “All of us are called to a life of service. All of us are called to holiness.”
Young people are interested in the 2,000 years of teachings and traditions of the Catholic Church, he said. They’re looking for authoritative answers to questions.
Father Doerr encouraged parishes to look for ways to challenge young people to live their faith. He cited the Knights of the Holy Temple, a fraternity for Catholic teens he founded that encourages active involvement in the church. Participants assist at Mass, study the faith, contribute to the community and support one another in living the faith. They also participate in outings such as mountain climbing.
The Knights of the Holy Temple are in several parishes throughout the country. While the group is primarily about encouraging men to be good Catholics, it has also drawn some to the priesthood as they have deepened their faith. Several former members are now ordained clergymen.
“Men are looking for adventure,” Father Doerr said. “Where can they find it in the church?”
At the end of the vocations summit, pastors, youth ministers, religious educators and others gathered in small groups to discuss vocations.
Father James Sorra, archdiocesan vocations director, said it is the responsibility of everyone to encourage vocations. Those considering the priesthood, diaconate or religious life should talk to someone they trust, he said. That could be their pastor, a friend, a family member, a youth minister or someone else in the church, he said. They can also learn more at becomeapriest.org, the archdiocesan vocations website.

U.S. sister ‘changed my life,’ says orphaned man who had tumor as child

Running for others: Annual Ignatian 5K a spiritual exercise