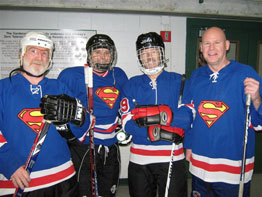 “Almost all my muscles are sore,” said the Resurrectionist, a theology professor at Mount St. Mary’s University in Emmitsburg. He was forced to skip his usual skating routine as an ice hockey player and coach while he lived a semester abroad in Prague, Czech Republic.

“If you skate as hard as you can,” said the toned Toronto native about each stint on the ice, “you are absolutely exhausted for those 45 seconds of ice time. Hockey is a great sport to stay in shape; ice skating is a good mental break and a lot of fun.”

Father Donohue, 53, coaches the Mount St. Mary’s University ice hockey team and plays left wing and center in an over-50 league in Laurel.

On many weekends after assisting with Masses at St. Bernadette, Severn, the coach heads off to the Ice House skating rink to play or practice.

“It’s so much cheaper than going to a baseball game,” he said, “plus you’re exercising.”

Ice skating was an integral part of the priest’s family life while growing up in Canada, where ice hockey is a basic component in the culture. Ice skates have been strapped to Father Donohue’s feet since age 2; he played on his first ice hockey team at age 4.

In the winter, his father packed down the snow in their backyard, ran a garden hose through the window and created an ice skating rink for the four Donohue boys. His mom – who taught her kids how to keep their balance on ice skates by pushing around small chairs on the ice – would whip up hot chocolate as the entire family emerged from the cold, red-nosed and sniffling.

Every hockey season at the Mount the coach is approached by students who have never skated or played the sport. “Could we learn?” they want to know. He tells them yes, if they come to every practice and go public skating.

Although it’s more challenging to skate while also coordinating a hockey stick and equipment, people can take up ice skating at any time.

“There are all ages of people out there public skating,” said the hockey enthusiast. “You’re not in competition, you’re just out there to enjoy yourselves and skate at the level you skate.”

Skating rinks can also provide a safe venue for kids to congregate.

“They skate, they play video games and hang out with their friends,” he said. “Parents pick them up a few hours later. My parents were happier for us to hang out at a rink than the mall. The worst thing that happened is we drank too much soda.”