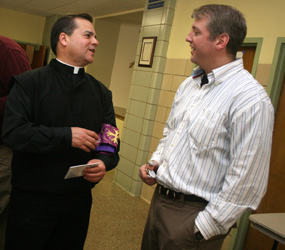 Rather than curse the cultural darkness that afflicts the 21st century, provide some illumination by reflecting the radiance of Jesus Christ.

That was the message shared by Archbishop Edwin F. O’Brien and several guest speakers at the 12th annual conference conducted by the Catholic Men’s Fellowship of Maryland March 21 at Towson Catholic High School.

With “Answer His Call” as a theme, the agenda included opportunities to share over breakfast and lunch; the sacrament of reconciliation; eucharistic adoration at adjoining Immaculate Conception parish; a concluding Mass; and talks by the archbishop and two visitors from Pennsylvania.

Mr. Houck and his followers have targeted and succeeded in shutting down what he terms “SOBs,” sexually oriented businesses. Both he and Father Chavez, who attended Mount St. Mary’s Seminary, draw clear lines between industries that objectify and destroy life.

“We see pornography,” Mr. Houck said, “as the root of abortion.”

Men nodded, scribbled notes and leafed through dog-eared Bibles in the Towson Catholic auditorium as Father Chavez, Mr. Houck and then Archbishop O’Brien implored them to lead their families through righteous living, an adherence to the Gospel and, rather than dwelling on mistakes, learning from them.

“The Lord is not concerned with sin and weakness,” said Father Chavez, a member of the Society of Our Lady of the Most Holy Trinity. “The Lord is interested in moving forward. What do we let define us, our past sins or the Lord’s promise?”

A way to do that, Mr. Houck said, is to limit – if not eliminate – those negative influences that can damage men, women and their children.

“How many men let the predator into their home?” Mr. Houck asked. “The cable (television), the Internet, the cell phone.”

Before breaking for lunch, Monsignor James P. Farmer, the chaplain for the CMF of Maryland and pastor of St. Ursula in Parkville, took to the podium, introduced eight other priests heading to makeshift confessionals and said “there are 247 men here today – let’s not leave before we go to confession.”

Moments later, to Gil Hoffman, the president of the CMF of Maryland, fellow organizer Tom Wiegand hollered, “Hey, Gil, where are confessions on this floor?”

Archbishop O’Brien was bolstered by that spirit.

“There are certainly a lot more men than we had last year,” he said. “I think they need the peer encouragement they get here. The turnout, the enthusiasm, this is something men have been hungering for.”

Father Chavez referenced the Mel Gibson film “Braveheart.” Mr. Houck touched on his days as a football player at The Catholic University of America. Archbishop O’Brien shared lessons from his decades ministering to the military, like the admonition that “officers eat last” – only after filling the needs of those under their command.

The analogy was then driven home.

“A father not only teaches principles, he loves them. He does not water them down so as to make them acceptable. … As fathers, you set the laws for your children.”

At the concluding Mass, George Misulia, a music director at St. John in Westminster, led hundreds of men in vibrant song.

“May this day bring you freedom to reflect, and bring the radiance of Christ to your families,” Archbishop O’Brien said during a brief homily.

“From this momentum,” Archbishop O’Brien said, “we’re going to get some priests.”