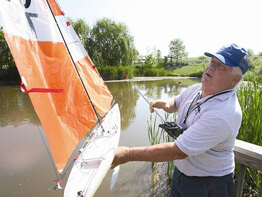 When JoAnn Huebler and her family found a remote control boat named “Poppy” they knew it would make a perfect gift for her father, Joe Danneman, because his five grandchildren call him “Poppy.”

“He loves it,” she said of her father, a former Navy man and a Catholic who serves as usher in the nondenominational chapel at Oak Crest, a retirement community in Parkville, where he lives and where Mrs. Huebler is a retirement counselor.

After Mr. Danneman’s stroke, his family thought operating the boat would be good for his motor skills. Consequently, he joined The Blue Heron Yacht Club on the campus.

Now kicking off its season, the yacht club sails on the manmade lake at Oak Crest and competes with other retirement communities. If weather holds, races are held twice a week; residents are encouraged to craft their own boats.

The boat club is one of hundreds of clubs with varying interests for seniors 60-plus at the campus of Oak Crest. Charlestown Retirement Community in Catonsville has hundreds more.

From various Bible studies to an oil painting group, and from a live television studio to ballroom dancing, seniors are playing. Other activities include rubber stamping, coin clubs, quilting, volleyball, flower arranging (the “Happy Daisies”), genealogy, a Fourth of July planning committee, and choirs.
There’s even a clown club. The Smileys – a seven-member group – dress in full clown attire to entertain parishioners of Our Lady of the Angels, Catonsville, which is situated on the Charlestown community’s campus.

Twenty-two years ago, parishioner Regina Service “was unhappy because I didn’t see any smiling faces,” she said, thus she began the club.

The seven members in colorful attire perform at parties in the care center and in the dining room during some meals, acting silly, doing funny things and sometimes using talking dolls.

“People smile when they come in who have never smiled before,” said Mrs. Service.