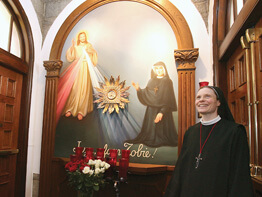 As the official Archdiocesan Shrine of Divine Mercy, Holy Rosary has been host to hundreds of Catholics from Maryland and throughout the Mid-Atlantic states for the service the Polish parish has been celebrating since 1993 – seven years before Pope Paul II proclaimed the Sunday following Easter Divine Mercy Sunday.

The Fells Point parish has several ties to Divine Mercy and to St. Faustina Kowalska, the Polish nun to whom Jesus appeared in the 1930s and who was the first saint canonized in the third millennium on April 30, 2000.

St. Faustina recorded Jesus’ message of mercy that “no souls that come to me depart without being comforted. All misery vanishes in my mercy: and every grace, redemptive and sanctifying, stems from this source,” in her diary, according to literature provided by Holy Rosary.

St. Faustina’s message from Jesus was the inspiration for Divine Mercy Sunday.

The church’s late pastor, Father Ronald Pytel, attended St. Faustina’s canonization ceremony in Rome and the healing of his own heart ailment on Oct. 5, 1995, (the anniversary of St. Faustina’s 1938 death) was judged to be a miracle by the Vatican.

“Father Ron was actually in this church when the miracle occurred,” said Mary Sherron, coordinator of the Holy Rosary’s Shrine of Divine Mercy. “It happened in a Polish church on the anniversary of St. Faustina’s death, a Polish nun.”

The late Pope John Paul II, who canonized St. Faustina, had also visited Holy Rosary when he was still a cardinal in 1976, a few years before he was elected pope.

With a seating capacity of 2,000 and its shrine devoted to St. Faustina, Holy Rosary is a natural destination to celebrate Divine Mercy Sunday, said Sister Rose Walatka, C.S.M.J., parish secretary.

During Divine Mercy Sunday at Holy Rosary, confessions will be heard from noon to 1:30 p.m., followed by discussions led by Sister Rose. Mass will be celebrated at 2 p.m. with portions in Latin accentuated with Polish hymns, and the Chaplet of the Divine Mercy will be recited at 3 p.m., the hour of Jesus’ death.

Those who take part in the Feast of Mercy are forgiven of all sins and leave the event in the state of grace they enjoyed at their baptism, Ms. Sherron said.

“The significance (of Divine Mercy Sunday) is to focus on the sacrament (of penance), much like we focus on the resurrection on Easter,” said Monsignor Robert J. Jaskot, chancellor of the Archdiocese of Baltimore. “In the Gospel, Jesus appears before the disciples who abandoned him and grants them mercy. They in turn spread the good news of Jesus.”

After the Shrine is incensed, refreshments will be served in the lower church hall, and Holy Rosary will remain open until “the last soul’s needs are met,” Ms. Sherron said.

Though not all parishes in the Archdiocese of Baltimore celebrate Divine Mercy Sunday, more are opting to include it in their schedules, including Church of the Resurrection, Ellicott City, and the National Shrine Grotto of Lourdes, Emmitsburg.

“It’s an amazing spiritual experience,” Ms. Sherron said. “It’s incredibly liberating when you put your trust in the Lord.”