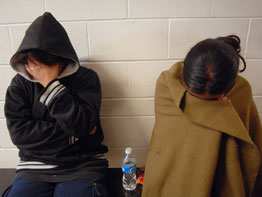 LIMA, Peru – In the bustling commercial town of Nueva Cajamarca, young women in tight skirts and midriff-baring tops watch curiously as a van bounces slowly down the dusty, rutted road. Catching sight of a local official in the vehicle, they dart into the open doorways of local bars.

Inside, women – including some adolescents – sit at wooden tables drinking beer with customers. The more a man drinks, the higher the woman’s percentage. If the man wants sex, that is for sale, too.

City officials have cracked down on the bars, and officials say they are finding fewer and fewer adolescents. But they say the people who used to lure girls from rural villages to Nueva Cajamarca with promises of waitress jobs that turn into prostitution are probably taking them to another town instead.

Nueva Cajamarca is just one dot on a global map of routes along which criminal gangs traffic in people – young women from Africa for the sex trade in Denmark, Filipinas for domestic labor in the Middle East, Moldovan children for begging in Moscow, Chinese men for construction work in Israel, Nepalese girls for circuses in India.

From fruit-packing plants in Britain to plantations in Malaysia and West Africa to fishing boats on the high seas, a globalized economy and the incessant quest for lower costs grease the wheels of a system in which policies favor forced labor and human trafficking even as countries claim to crack down on illegal immigrants.

“It’s one of the most important human rights issues in the world. It’s referred to as modern-day slavery,” said Kevin Appleby, director of immigration and refugee policy for the U.S. Conference of Catholic Bishops. “There’s a lot of money involved and people’s lives are shattered, children particularly.”

Worldwide, Catholics are responding by providing shelters, lobbying for anti-trafficking policies and promoting jobs that will allow people to make a decent living at home, keeping them from falling prey to unscrupulous labor recruiters.

“What is unique with the Catholic Church is that there are social programs and people concerned about (the issue) at the point of origin, transit and destination,” said Mary DeLorey, strategic issues adviser for Catholic Relief Services, the U.S. bishops’ relief and development agency.

Roger Plant, director of the International Labor Organization special program to combat forced labor, called forced labor “the underside of contemporary economic globalization.” The ILO estimates that there are about 10 million people in forced labor. Other estimates range from 4 million to 27 million.

Work is considered forced labor if the worker cannot get out of it without threat of punishment or harm. Migrants might pay a smuggler to get them into another country. They become trafficking victims if someone holds them captive while forcing them to work to pay off their travel, withholds their wages, takes away their passports or otherwise exploits them.

In the past decade, there has been a boom in “professionals who specialize in finding cheap labor for different industries and finding ways to get aspiring migrants illegally across national borders,” Abhijit Dasgupta, senior manager for safe migration for the International Catholic Migration Commission’s Southeast Asia office, told Catholic News Service.

Globally, migrant labor is an economic force to be reckoned with. The $300 billion in wages that the world’s 150 million or so migrant workers sent home in 2006 – up from $131 billion in 2000 – would power the economy of a country about the size of Denmark.

While no one knows exactly how much is sent home by the nearly 10 million workers who are trapped in forced labor, it could represent up to $20 billion of that total.

Asia is a hot spot for labor trafficking.

“Most of the recruitment of forced labor takes place in countries like Myanmar, Cambodia, Indonesia, Vietnam, Bangladesh and Nepal,” Dasgupta said. “The destinations are Thailand, Malaysia and India, and sometimes the Middle East.”

Children are taken from Cambodia to beg on the streets of Ho Chi Minh City, Vietnam. Small boys from Pakistan and India become camel jockeys in the Middle East, and “young girls from Nepal work in circus troupes in India,” he said.

In Western Europe, countries like Italy, Portugal and Greece depend on migrants – many from Eastern Europe – to work in the fields and care for senior citizens, said Michael McKennett, who heads the Catholic Relief Services office in Moldova, a tiny country that was once part of the Soviet Union.

Forced labor also occurs within U.S. borders. Of the estimated 17,000 people trafficked into the United States each year, Mr. Appleby said, about half end up in the sex trade and half in other types of work.

Because the problem is complicated, experts say, it must be tackled on many fronts.

Mr. Appleby agreed that the battle against forced labor could be won with effective policies in the United States and internationally.

“It may not be next year or the year after,” he said, “but it’s something that could be eradicated in the next 20 years if we did it right.”