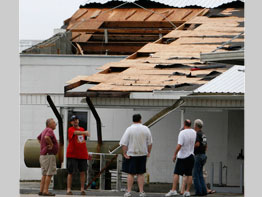 NEW ORLEANS – Though it appeared Sept. 2 that the Archdiocese of New Orleans sustained minimal damage to its buildings and operations from Hurricane Gustav, New Orleans Archbishop Alfred C. Hughes feared the Diocese of Houma-Thibodaux was battered the hardest of Louisiana’s seven dioceses during the Labor Day-weekend storm.

Archbishop Hughes, who rode out Hurricane Gustav at the St. Louis Cathedral rectory after helping hundreds of residents evacuate the city on buses, said he spoke briefly late Sept. 1 with Houma-Thibodaux Bishop Sam G. Jacobs at the St. Joseph Co-Cathedral in Thibodaux.

Though Bishop Jacobs did not have any confirmed reports of damage to areas in the low-lying Terrebonne and Lafourche civil parishes, Archbishop Hughes said Bishop Jacobs feared the damage would be significant.

“I suspect the Houma-Thibodaux Diocese had suffered the greatest damage (among Louisiana’s dioceses),” Archbishop Hughes said in a telephone interview with the Clarion Herald, newspaper of the Archdiocese of New Orleans. “Houma has been severely hit.”

Bishop Jacobs left his residence after losing electrical power and spent the evening at the co-cathedral rectory in Thibodaux. The Archdiocese of New Orleans assigned Aaron Portier of Catholic Charities of New Orleans to serve as a liaison to the Houma-Thibodaux area.

Archbishop Hughes said the worst damage in the Archdiocese of New Orleans was expected to be in the Lafitte area of lower Jefferson Parish, which is low-lying and always subject to flooding, and in lower Plaquemines Parish on the east and west banks of the Mississippi River.

After the worst winds subsided, New Orleans police officers gave Archbishop Hughes a tour of the city. Compared to Hurricane Katrina three years ago, there was little visible damage to archdiocesan facilities, he said.

Several windows were blown out in a 12-story archdiocesan office building on Howard Avenue in downtown New Orleans – which also had happened during Katrina. But Notre Dame Seminary, which sustained significant flooding during Katrina, was not badly damaged this time, he said.

New Orleans Auxiliary Bishop Roger P. Morin and Father Jose Lavastida, Notre Dame Seminary rector, rode out the storm at the seminary and remained there Sept. 2 with power supplied by a generator.

“There are a lot of branches down in the streets and a lot of trees on the ground, but I saw no sign of flooding of any kind,” Archbishop Hughes said.

Archbishop Hughes also spoke with Lake Charles Bishop Glen J. Provost and Alexandria Bishop Ronald P. Herzog. Bishop Provost was scheduled to take a damage-assessment tour of his southwest Louisiana diocese Sept. 2. Lake Charles was badly damaged by Hurricane Rita in 2005. Bishop Herzog did not expect much damage in his diocese, located in the geographic center of Louisiana.

Archbishop Hughes praised local officials for learning the hard lessons from Katrina on how to properly evacuate thousands of residents in advance of a major hurricane.