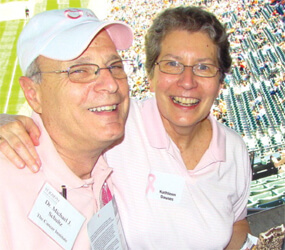 Sister Kathleen Dauses, of the Sisters of St. Francis of Philadelphia, has been a chaplain at Stella Maris Hospice in Timonium for six years, accompanying the terminally ill through their last days.

Last winter, she was a patient herself at St. Joseph Medical Center, where she underwent diagnosis, surgery and therapy for her breast cancer – all in less than six weeks.

“The rapidity of my treatment and follow through, and being able to talk to the people I needed to talk to, that minimized my fear, anxiety and apprehension,” she said of the Breast Center at St. Joseph’s Cancer Institute. “Their motto is ‘No sleepless nights.’ I don’t know how many I had, but mine were minimal.”

Sister Kathy, as the Baltimore native is known, benefitted from MammoSite brachytherapy, which delivers radiation internally to minimize a post-lumpectomy recurrence in breast cancer patients. St. Joseph began offering the treatment in April 2007, and Sister Kathy’s case illustrates how quick treatment can be for some.

Her annual mammogram, on Jan. 29, raised a red flag. A biopsy was taken that same day, as Dr. Michael J. Schultz, director of the Breast Center at St. Joseph, expedited her care.

“He even got the guy who picks up (biopsy) specimens to wait, so mine would go out that night,” Sister Kathy said. “Dr. Schultz called me at home the next day with the result. It was what he had guessed, DCIS.”

While Ductal carcinoma in situ is considered the earliest form of breast cancer, Sister Kathy said she had the highest grade.

On Feb. 20, she underwent a lumpectomy, removal of the tumor. The pathology report showed that the cancer had not gone outside the affected duct, making her eligible for MammoSite therapy, in which a device implanted through a catheter delivers more precise radiation.

“MammoSite provides maximal therapy to that area,” Dr. Schultz explained in an e-mail. “It avoids external beam radiation, which can scatter to heart and lungs and cause a great deal of tissue damage to the whole breast, with long-lasting side effects.”

Over the span of five days, from March 2-6, Sister Kathy received 10 treatments, two per day, separated by approximately six hours. None lasted longer than seven minutes.

“It interrupts your life for a week, but then it’s over with,” Sister Kathy said. “I took off that week and the next Monday, and returned to work Tuesday. I had no reaction to the radiation, didn’t feel unduly tired, experienced no redness or burning to the radiation site.

“This was so simple to me. I can’t say enough good things about Dr. Schultz.”

Sister Kathy celebrated last spring with Dr. Schultz and his staff at an Oriole game. Always an avid walker, she’s joined a women’s fitness program. On Oct. 2, Sister Kathy donned a purple sweater for “Ravens Friday” at Stella Maris. At 66, she is a picture of vibrant health, buoyed by prayer and a positive attitude.

Sister Kathy grew up in Hamilton, attended St. Dominic’s parish school, The Catholic High School of Baltimore and St. Joseph’s College in Emmitsburg. She got her master’s in education from what is now Loyola University Maryland.

From 1969 to ’95, she was principal or taught at St. Charles Borromeo in Pikesville, St. Michael the Archangel in Overlea, a school in Georgia and finally, her childhood parish of St. Dominic.

“The daughter of one of my hospice patients,” she said, “made the connection and asked ‘Were you at St. Michael? You taught me in the fifth grade.’ ”

Her empathy was enhanced during an assignment in Portland, Ore., where she volunteered at retreats for AIDS patients.

“I got to know their stories, their pain, their rejection, their acceptance of self and others,” Sister Kathy said. “That gave me a great understanding of people. I call it a gift. Not everyone can be with the dying. I can comfort them and their families, and journey with the person who’s dying.”