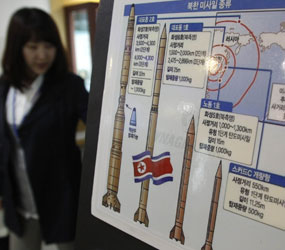 WASHINGTON – President Barack Obama’s recent move to open a new round of nuclear arms reduction talks this year represents the best opening since the presidency of Ronald Reagan to make meaningful cuts in the world’s nuclear weapons stockpiles, according to faith-based disarmament advocates.

Speaking in Prague, Czech Republic, April 5, Obama called for a new Strategic Arms Reduction Treaty with Russia to replace the 1990s-era START, which expires Dec. 5. A new treaty, the president said, would be a step toward the eventual elimination of nuclear weapons.

The president said he and Russian President Dmitry Medvedev broached the subject during the economic summit in London in early April. Obama told his Prague audience that he and his Russian counterpart agreed to seek a treaty by the end of the year that is “legally binding and sufficiently bold.”

While Obama declined to specify numbers, talk has surfaced that both sides are eyeing steep reductions in their arsenals from about 6,000 warheads each to perhaps as few as 1,000 warheads each during the life of a new arms agreement.

Bold indeed, and a positive step, said Ronald E. Powaski, a retired adjunct professor of history at Cleveland State University who has written on arms control topics for three decades.

“It means he’s serious about his goal about eliminating nuclear weapons,” Powaski told Catholic News Service. “START is one of the key pillars of the whole international effort to control, first of all, and eliminate nuclear weapons.”

Obama’s offer is being embraced by long-standing nuclear disarmament proponents, such as Pax Christi International and its affiliate, Pax Christi USA, and the U.S. Conference of Catholic Bishops.

“I think that the president’s initiative announced in Prague is an important first step in his administration and hope it will move the ball forward,” Bishop Hubbard told CNS. “It’s not the ultimate goal we would like to see (of full nuclear disarmament), but it is a positive step in the right direction.”

Bishop Hubbard’s letter is the latest in a series of calls for disarmament and letters of support to engage in reduction efforts that have been undertaken by the bishops’ conference since its 1983 pastoral letter, “The Challenge of Peace: God’s Promise and Our Response.”

The bishops’ stance echoes that of the Vatican, which has long called for the elimination of nuclear weapons around the world.

“The bishops don’t bring technical expertise to the question of nuclear weapons,” said Stephen Colecchi, director of the U.S. bishops’ Office of International Justice and Peace. “We just bring moral expertise to that.”

Meanwhile, Marie Dennis, co-president of Pax Christi International, expressed hope that the Obama administration’s first step will lead to further actions that would demonstrate America’s commitment to peace. One such effort would be ratification of the Comprehensive Test Ban Treaty by the U.S. Senate.

Although the U.S. is a signatory to the 1996 treaty, which prohibits any explosive tests of nuclear weapons, the Senate has yet to ratify it. Neither the U.S. nor Russia has tested such weapons since the early 1990s.

David Cortright, a research fellow at the Kroc Institute for International Peace Studies at the University of Notre Dame in Indiana, said momentum for strong arms control agreements has been building for more than two years.

Citing two Op-Ed pieces since 2007 in The Wall Street Journal by former Cold War diplomatic veterans George P. Schultz, William Perry, Henry Kissinger and Sam Nunn, who have called for the U.S. to seek significant reductions in strategic arms in partnership with the Russians, Cortright said those who advocate for more weapons systems have become a shrinking minority.

“I think there’s a decent chance that there could be sufficient Republican support” for the new treaty with Russia, said Cortright, who also is co-chairman of Faithful Security, a religious partnership based in Goshen, Ind., and concerned about the danger of nuclear weapons.

Beyond nuclear weapons, Obama’s plan encompasses limits on the production of weapons-grade materials and for the development of stringent steps to secure nuclear materials from black-market trade within four years.

To assist emerging countries, Obama also called for the creation of an international fuel bank to allow nations to develop nuclear power options without increasing the risks of nuclear weapons proliferation.

Colecchi suggested that the administration could take a step to further demonstrate its intentions by reversing current policy that keeps long-range missiles on hair-trigger alert. Doing so would reduce the likelihood of an accidental launch, he said.

As the expected negotiations unfold this year, Dennis said it will be the work of grass-roots organizations to build the political will across the country so that the U.S. Senate quickly approves any arms control treaty once it is signed by both nations.

“We’re encouraging bishops within their dioceses to make known the bishops’ teaching on nuclear war and to help people understand the importance of what the president is proposing,” he said.