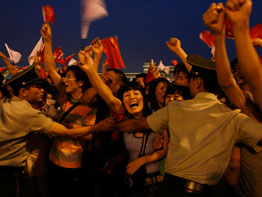 VATICAN CITY – A Chinese bishop said he had mixed feelings about attending the opening ceremony of the Olympic Games in Beijing because of the government’s continuing mistreatment and mistrust of the Catholic Church.

“The five rings of the Olympic logo are known throughout the world. I wish China would attach the same importance to the five interconnected principles of democracy, human rights, the state of law, justice and peace,” said Coadjutor Bishop John Tong Hon of Hong Kong.

Bishop Tong said he was honored to attend the ceremonial opening, which some international figures skipped to protest China’s human rights record.

“I’ve always appreciated the Olympic Games. This year, I’m proud of the fact that my country is hosting them. For me it is an honor to receive an invitation from the government to participate in the opening ceremony,” he said.

But Bishop Tong said he was embarrassed by the fact that the government did not invite other leading churchmen, including Cardinal Joseph Zen Ze-kiun of Hong Kong, with whom he shares pastoral duties. Cardinal Zen has been a frequent and vocal critic of the government.

The Chinese government should have had a “more open mind” and invited all religious leaders to attend, he said.

Bishop Tong cited a long list of Chinese church leaders who were either under arrest, detained or harassed by the government and said they were “suffering for our Catholic faith and for fidelity to our Holy Father.”

He noted China’s recent costly and socially disruptive efforts to clean up air pollution ahead of the games and said a similar effort should have been made to understand the importance of “greater religious and social freedom.”

The bishop cited as a positive sign China’s collective and collaborative efforts to aid earthquake victims in Sichuan province in May.

But he said another negative sign for religious freedom appeared when the government limited pilgrimages to a prominent Marian shrine May 24, which was designated by Pope Benedict XVI as a day of prayer for the church in China.

“The authorities still don’t trust Chinese Catholics and feel threatened when we practice our faith,” he said.

Bishop Tong ended his article with a prayer for the Olympic Games, asking that “the Holy Spirit may lead all who participate in these games to a happy conclusion.”

Bishop Tong, who at 69 still occasionally plays basketball, said he was convinced that sports are an important social and physical activity for everyone.