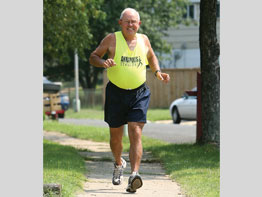 For someone whose avocation involves the specific measurement of distance and time, road runner Neil Hinkle was rather casual in gauging his involvement at Holy Trinity in Glen Burnie.

Asked about his parish involvement, Mr. Hinkle mentioned being a lector and helping prepare the church for funerals, but Father J. Bruce Jarboe, the Holy Trinity pastor, said that was only half of it.

Mr. Hinkle, 71, is a longtime contributor to parish life, a retired insurance agent, and a mainstay on the running scene in Anne Arundel County, as the vice president of racing for the Annapolis Striders.

He was a latecomer to running, responding to a burgeoning waistline that greeted him as he entered his mid-40s.

“I had played some sports at old Southern High in South Baltimore, but I stopped playing golf when I got married more than 40 years ago,” Mr. Hinkle said. “I was looking for a way to eliminate my potbelly. My children were starting to run for Old Mill High, so I decided to try it.

“I didn’t own a decent pair of shoes when I first went out to jog.”

Mr. Hinkle fell in with a group called “Moore’s Marines” that was training for the U.S. Marine Corps Marathon, one of the nation’s most popular road races.

He soon became hooked on the camaraderie and well-being he found in logging 50 miles a week. In his second marathon in 1983, Mr. Hinkle covered the classic distance of 26 miles, 385 yards in 3 hours, 34 minutes. It was a heady accomplishment, considering his age and miniscule background in the sport.

Mr. Hinkle twice took on the old Maryland Marathon, which included a brutal climb up Satyr Hill in Carney. Aiming for one a year, he completed his 13th and final marathon in 1998. He has scaled back to training 20 miles a week, but can jump into a race on a moment’s notice, as he’s usually in attendance as part of the support crew.

Mr. Hinkle helped organize the Annapolis Striders Women’s Distance Festival July 12, then jumped in the “Run After the Women 5K” that followed, covering the 3.1 miles at a leisurely 10-minute mile pace that allows for conversation.

One of the premier road running clubs in the Archdiocese of Baltimore, the Annapolis Striders help keep the sport alive and well. Mr. Hinkle is in the midst of conducting a series of Thursday night cross-country races that will prepare high-schoolers for the upcoming season.

“I bring a clock and the water, and there’s no charge,” Mr. Hinkle said. “As long as they sign a waiver, kids can run all four races for free.”

Whether it’s to his parish or the activity that has made his senior years vibrant, Mr. Hinkle enjoys giving back.

“I’ve been fortunate, in that injury never shut me down,” Mr. Hinkle said. “I never pray about a result. After my run, I thank God that I was able to get through it and enjoy it.”