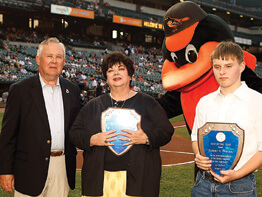 Before the first pitch was thrown at Oriole Park Aug. 24, a Calvert Hall College High School, Towson, student and a parishioner of St. Joseph, Taneytown, were honored during the Archdiocesan Holy Name Union Baseball Game at Camden Yards.

Holy Rosary, Fells Point, parishioner Bobby Sherron, 16, of Marriottsville was chosen as the junior recipient because of his tireless efforts in civic labors; work in his church and for being a role model for other young people, according to a press release by the Holy Name Union.

Linda Webster of Taneytown was also chosen this year as the adult Holy Name Member of the Year because of her industrious spiritual and community endeavors, according to the Holy Name Union.

“Bobby is a great kid, and one of our really good students,” said Chuck Stembler, assistant principal at Calvert Hall. “In addition to all of the other stuff he is involved in, he serves on the student newspaper and Its Academic at the school.”

The Calvert Hall junior helps out the homeless, participates in all Holy Name events, volunteers at the Fells Point and Polish festivals, is an altar server at Holy Rosary, assists in the parish gift shop and helps with Shrine of Divine Mercy affairs, according to the Holy Name Union.

According to a press release by the organization, “Bobby has done pilgrimages to Rome, Poland, Emmitsburg and the John Paul II Cultural Center in Washington, D.C. Bobby has been a role model of virtue obvious to all, with a true heart for Christ that has undying love for his church. He has a true understanding of his faith and what Holy Name stands for.”

Ms. Webster has been extremely instrumental at St. Joseph’s, as well as Taneytown itself, Ms. Pence said.

Ms. Webster has also served on the parish council, been a teacher for the religious education program at St. Joseph’s, and volunteered as first parish school bus driver from 1975 to 1980, according to the Holy Name Union.

Her community contributions include serving on the board of trustees of the Mother Seton School, the Carroll County Historical Society board of directors and sponsoring 26 refugees from Vietnam, Laos and Poland from 1975 to 1982.

“Linda truly practices the corporal/spiritual works of mercy in her daily life within the town of Taneytown,” according to the Holy Name Union.