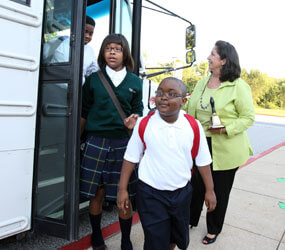 Kathleen Filippelli beamed with pride as she stood in front of a crowd of about 300 people the morning of Sept. 7.

“I’ve been waiting months to say this,” Filippelli said. “We are Holy Angels.”

The principal of the Archdiocese of Baltimore’s newest elementary school, Holy Angels Catholic School, watched as the crowd burst into applause.

“This is a wonderful day, a historical day,” the archbishop told the crowd, which included hopeful students, families and teachers.

It was a day some thought was not possible months ago. Archbishop O’Brien announced the closing of 13 schools, including 12 elementary, in March. Three of those schools – St. William of York, St. Bernardine and Father Charles Hall – served the West side of Baltimore, where Holy Angels is based.

Archbishop O’Brien expressed optimism that Holy Angels was a sign of a new day in Baltimore.

“Please God,” he said, “we’re going to grow and grow big from here.”

The archdiocese said there were 191 students enrolled on the first day of school with the number possibly increasing to more than 200 in the coming weeks. The first and eighth grades are at capacity.

Monica Pinkett snapped photos of her daughter, third-grader Dariona, in front of the building.

“I hope that it will stay open and that she gets a good Catholic education,” Pinkett said of Holy Angels. “I think it makes all the difference in the world.”

Dariona stayed close to her mother and surveyed the group of children in front of school, hoping to spot friends and longtime classmates. Many students arrived via a new transportation program, which is a partnership between the archdiocese and a local businessman.

Sharon Wible taught at St. Rose of Lima for 22 years before it closed in the spring.

Wible is now Holy Angels’ librarian and is handling federal funds and grants. She proudly showed off her new library, which featured furnishings and books from St. Bernardine.

“I feel like I’m walking into Christmas,” Wible said. “The kids are so excited. I’m going to learn this library as they’re learning it.”

Pinkett, a non-Catholic, said she wants a bright future for her daughter at Holy Angels.