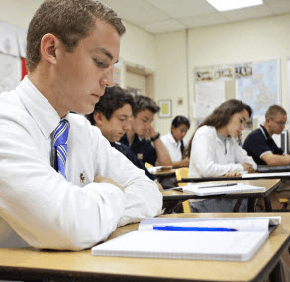 Holocaust survivor Leo Bretholz continues to recount his memories from the historical event for those who are not alive to do so themselves.

“We speak for them (the dead) so their memory is never forgotten,” said Bretholz, 91.

The Pikesville resident is one of the Holocaust survivors featured in the film “See You Soon Again,” which will be shown at The John Carroll School in Bel Air Oct. 17.

Students from John Carroll; Pikesville, Perry Hall and Northwestern high schools; and Krieger Schechter Day School in Pikesville are featured in the 63-minute film, which examines the effect telling the story of the Holocaust has on survivors and students who hear their stories.

Louise Brink Géczy, John Carroll’s senior project program coordinator and the teacher responsible for bringing the film to the school, said it is another tool to teach about the Holocaust.

“It’s vitally important for students to be exposed to first-hand accounts,” Géczy said. “Students come away stronger, more fully aware of the world and their surroundings. Kids will come to me at the beginning of (their) senior year and say ‘I’ve been looking forward to this since I was a ninth-grader.’ It has a great deal of meaning to them.”

“Holocaust studies involves so much more than what occurred in the Holocaust,” Géczy said. “John Carroll has a truly deep commitment to Holocaust education and it fits with our mission of putting out students who have a global perspective.”

The life lessons students learn from studying the Holocaust are “limitless,” said Géczy, who noted students hear from Holocaust survivors who were in death camps and hiding.

“They (the survivors) typically tell what happened to them during the Holocaust from beginning to end. It’s a very powerful experience.”

Laura Hottle, a John Carroll alumna who expects to participate in the panel discussion, said her favorite part of learning about the Holocaust was meeting the survivors.

“Instead of just learning things out of a textbook, you get to meet real people who went through it,” Hottle said. “I was able to see the impact of the Holocaust on actual people and hearing the stories – it has just made me become more of a compassionate person.”

Wegenstein, director of the Center for Advanced Media Studies at The Johns Hopkins University in Baltimore, was motivated to make the film after she learned Bretholz spoke at Baltimore schools three times each week.

“How does he do that and why does he put himself through the suffering over and over again?” Wegenstein asked. “It’s extremely hard to be talking about one’s own survival. Let’s just think about what it means for these people to tell these stories over and over again and what hard work it is for them.”

Taping for the documentary, which cost $500,000, began in 2010 and was completed last year, Wegenstein said.

The film, which premiered in May at the Maryland Film Festival and in Austria Sept. 26, will be released on Maryland Public Television in January 2014.

What: Screening of the Holocaust survivor film “See You Soon Again” and panel discussion