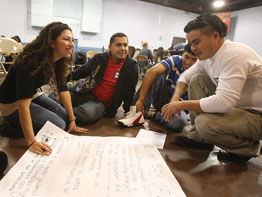 They sang. They danced. They praised. They were at ease.

Hispanic young adults came together Nov. 8 at Sacred Heart School in Glyndon for Explosion Juvenil (Young Adult Explosion), a motivational rally for people inside the Archdiocese of Baltimore to share their talents and faith with the world.

Spearheaded by the Division of Youth and Young Adult Ministry and the Hispanic Young Adult Council, the event showcased the musical, artistic and physical talents of the 120 people in attendance, many of whom were first-generation immigrants.

“Hispanic young adults have come here, as we all know, for a better life,” Georgina Vaca, coordinator for the Archdiocese of Baltimore’s Hispanic young adult and youth ministry, said. “It’s important for us as a church to provide a welcoming environment and more than anything (for young people to) feel at home.”

The entire day’s events were in Spanish, starting with a talk about the challenges of being an immigrant in the United States. They later divided into small groups to discuss their reactions and feelings and then shared them with the larger gathering.

An afternoon session followed that featured a celebration of the arts and a Mass. Six bilingual priests attended the all-day event.

While all who attended shared the Spanish language, many came from a wide variety of countries and took different journeys to the United States. Ms. Vaca said many arrived when they were relatively young, not sure if they would stay for long. Some were more recent immigrants who married quickly and started families in addition to finding work. As a result, their lives are now in full transition. They must assimilate while maintaining many of their own proud customs.

“Everybody’s united because they have the same perspective of God ,” Jeronima Fernandez, a 30-year-old Mexican immigrant who attends Mass at St. John in Westminster, said of Explosion Juvenil.

“We come here, have fun with friends in a good way to celebrate our faith,” Carlos Tolentino, a 21-year-old native of El Salvador and a parishioner of St. John the Evangelist in Columbia, said. “We’re just having fun like the youth we are.”

As the pair talked about their own transitions to the Baltimore area, the sounds of “La Casecha,” a young adult band that plays at the Catholic Community of St. Michael and St. Patrick in Fells Point were filling the nearby gymnasium.

Throughout the day, participants sang along with the music and danced in the aisles, sharing hours of commonality.

Father Luis Cremis, associate pastor at Our Lady of Pompei in Highlandtown, said the day was important in addressing the often-isolated feelings of immigrants.

“Youth means freedom,” Father Cremis said. “We’re giving a message to these youth, a message of love that they can transmit to others.”

Ms. Vaca said attendees of Explosion Juvenil will play a vital role in the future of the Archdiocese of Baltimore.

“The word Hispanic involves many, many countries from North, Central and South America and the Caribbean,” Ms. Vaca said. “So, we’re taking this opportunity for all these people to come together, be Christian, be Roman Catholic and be people of God.”