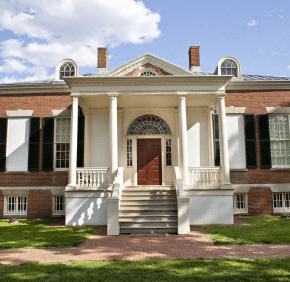 Motorists zip up N. Charles Street, perhaps unaware that they are passing places where Catholics made history. Slow down and walk an eight-mile stretch of Baltimore’s main street to see many reminders of history, inspiration and Catholic culture.

Named for Charles Calvert, the fifth Lord Baltimore (baptized a Catholic though he converted late in life), Charles has always been the city’s fashionable street. Until the Civil War, the downtown section was primarily residential but growing commerce forced residents north toward Mount Vernon and beyond, according to Francis O’Neill, senior reference librarian at the Maryland Historical Society’s Furlong Library. As residents moved north, Catholic institutions followed: schools, parishes, even the new cathedral.

At the starting point of our trek, Loyola Blakefield opened in the fall of 1934 on the former estate of Maryland Gov. Elihu Jackson. The Jesuit high school had outgrown its Calvert Street site (which also housed Loyola College) so Jesuit Father Ferdinand Wheeler, through the generosity of heiress Julia Blake, purchased the 36-acre estate for $135,000 ($1.9 million in today’s dollars). The Blake family is remembered in the school’s name and in the family crest inscribed over a door in Wheeler Hall.

Heading south, before Bellona, the red-tiled chapel with its enormous cross overlooking Charles signals Villa Assumpta. The 60-plus sisters who live here welcome visitors to their regular noon Mass.

Two miles south, towers the Cathedral of Mary Our Queen. The cornerstone for the contemporary Gothic cathedral was laid May 31, 1955, the first feast of Mary Our Queen. A plaque outside the Blessed Sacrament Chapel commemorates Blessed John Paul II’s 1995 visit. The cathedral, which seats 1,400, is named for the cathedra, the bishop’s chair, noted Monsignor J. Bruce Jarboe, rector.

He recommends viewing the stained glass depictions of the liturgical year and mysteries of our Christian faith throughout the nave. Monsignor Jarboe also noted that Archbishop Francis P. Keough, who led the cathedral’s construction, as well as Cardinal Lawrence Shehan, Archbishop William Borders and Bishops Jerome Sebastian, T. Austin Murphy and P. Francis Murphy are buried in the crypt. The cathedral’s benefactor Thomas O’Neill (see end of article) is remembered in stained glass near the sanctuary and in the St. Thomas More Chapel.

Notre Dame of Maryland University, founded by the School Sisters of Notre Dame, was the first Catholic women’s college in the United States to offer four-year degrees. It has been doing so since 1899, though it first opened as an elementary and secondary school in 1873. Its Marikle Chapel of the Annunciation, which underwent an award-winning restoration in 2002, is a popular wedding site.

Next door is Evergreen, admittedly not a Catholic site, where Alice and John Garrett, owners of the Gilded Age mansion, built a house next door for their son, Horatio, and his new bride in 1895. The couple never lived there but “Evergreen Junior” became the first classroom building and Jesuit residence of what is now Loyola University Maryland when it moved in 1921. In fall 1971, the college merged with Mount St. Agnes College and became co-ed.

Homewood, the 1801 Palladian-style home of the son of Charles Carroll of Carrollton, sits among Johns Hopkins University’s academic buildings. Designed by Charles Carroll of Homewood, the National Historic Landmark features family furniture, including Carroll’s portable writing desk and a traveling crucifix. During tours, these pieces and a portrait of Carroll’s mother highlight the family’s faith, business sense and regard for education.

For more inspiration, stop at the Baltimore Museum of Art to see works such as the 14th Century limestone sculpture Virgin and Child once owned by William Randolph Hearst and Botticelli’s Madonna Adoring the Child with Five Angels. Antioch mosaics on the museum’s walls were on the floors of early Christian structures. In the Sculpture Garden is Pablo Gargallo’s bronze of John the Baptist, The Prophet.

The 1897 parish of Ss. Philip and James took on a new role as a university parish in July 2010. Dominicans who had established similar parishes for the University of Virginia and New York University were asked to establish one for Hopkins.

“The parishioners are delighted students are a part of the parish. They bring life and energy and enthusiasm to the worship and the ministry and mission of the church,” said Dominican Father David Mott, who wielded tools to build a Newman Club in the rectory basement.

Hopkins’ Education Department is housed at 2800 N. Charles, built in 1907 as the Daughters of Charity’s Seton High School. It can be seen in Barry Levinson’s 1987 film “Tin Men.”

In Mount Vernon, the location of Donna’s Restaurant (under repairs after a devastating fire) was the home of Arunah S. Abell, founder of The Sun, and his Catholic wife Mary Fox Campbell, who raised their eight children in the faith. Daughter Mary Louise Abell, a Visitation sister, used her fortune to build three convents. News of her first vows was prominent on the front page of The Sun on Jan. 5, 1891.

Just a few steps off Charles Street, Charles Carroll of Doughoregan, son of the Homewood Carroll, wintered at his townhome at 16 E. Mt. Vernon Place from 1855 until his death.

The 22,000-piece treasure trove known as The Walters Art Museum isn’t Catholic, though its great benefactor Henry Walters was a graduate of Georgetown Preparatory School and the collection amassed by he and his father, William, includes ecclesiastical and liturgical art from the 13th to 17th centuries.

“He bought vast amounts of art that were made to be used in Catholic settings, both public and private,” said Gary Vikan, director of the Walters.

In 1902, Henry Walters bought 1,740 works of art from the grand almoner of Pope Leo XIII for $1 million. Raphael’s “Madonna of the Candelabra” was featured on a U.S. Postal Service stamp last Christmas. The Risen Christ, a bronze sculpture by Bernini, matches one over an altar at St. Peter’s Basilica in Rome.

Also in the collection is the St. Francis Missal, thought to be St. Francis of Assisi’s own prayer book. “Among Franciscans, that’s not just an interesting book, it’s a relic,” Vikan said. Because it is so fragile, it is only occasionally displayed. It was part of a 2009 exhibition of the St. John’s Bible.

The Pope John Paul II Prayer Garden, built in 2008, commemorates the pontiff’s visits to Baltimore in 1976 and 1995 and features symbols of Christianity, Islam and Judaism.

America’s Catholic hierarchy met for three Plenary Councils at the archbishop’s house at 408 N. Charles. These gatherings established the need for parish schools, catechism classes, upheld the value of a Catholic press and devotions such as 40 Hours, according to “The Premier See,” Thomas Spalding’s history of the archdiocese. Many still remember the Baltimore Catechism – developed in response to the Third Plenary Council, which also established the Catholic University of America and a fund for African American Catholics.

Brown’s Arcade at 322 N. Charles was once the site of the graveyard for Baltimore’s first cathedral, St. Peter’s Pro-Cathedral. Remains were moved to the “old” Cathedral Cemetery in 1815 – and moved again in 1887 to the “New” Cathedral Cemetery, in West Baltimore.

At Charles and Lexington – the final stop – Thomas O’Neill, the cathedral’s benefactor, established O’Neill’s Department Store. When the Baltimore Fire of 1904 threatened his business, he raced to the Carmelite monastery at Caroline and Biddle and begged the sisters to pray for his store’s survival. The wind changed direction, the store was saved. His bequest in 1919 funded construction of both the cathedral and Good Samaritan Hospital. As they rebuilt, city fathers decided to widen Charles to prevent future fires. The store was razed in 1961 but this widened corner serves as a reminder of where prayer stopped the Baltimore Fire of 1904 – and where the spark of an inspiration for a new cathedral was born.