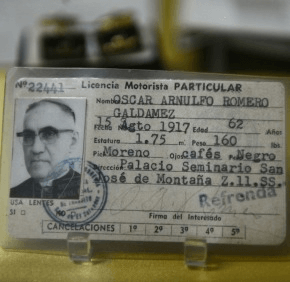 By Erik Zygmont
ezygmont@CatholicReview.org
Twitter @ReviewErik
The soon-to-be-beatified Salvadoran Archbishop Oscar Romero is a hero to local Latino Catholics, who laud him for his allegiance to the Gospel and the poor above any political philosophy.
“He did what every saint does,” said Rene Quintanilla, who emigrated from El Salvador to Maryland in 1981, a year after Archbishop Romero was assassinated while celebrating Mass. “He helped the poor, was protective of the poor, and he was a man of God who gave his life to the church.”
Quintanilla, 57, is a parishioner of Sacred Heart of Jesus – Sagrado Corazón de Jesús in Highlandtown, which will mark Archbishop Romero’s May 23 beatification with a special Mass the following day, May 24, at 12:30 p.m., celebrated by Archbishop William E. Lori.
The Mass will also celebrate Pentecost, said Redemptorist Father Robert Wojtek, pastor of Sacred Heart of Jesus.
As Pentecost commemorates the outpouring of the Holy Spirit on the apostles, “it kind of makes sense, if you consider the Holy Spirit continuing to move the church to act, as Archbishop Romero did,” Father Wojtek said.
As Quintanilla listens to the Baltimore archbishop deliver his homily May 24, he will remember Archbishop Romero’s homilies, which he heard on the radio more than four decades ago in El Salvador.
Archbishop Romero became Archbishop of San Salvador – El Salvador’s largest city and capital – in 1977, when the country was in unrest due to the extreme difficulties faced by its poorest citizens. The government put down protests and rebellion with force, torturing and assassinating dissenters, including clergy.
Upon Archbishop Romero’s appointment, many thought he would avoid direct conflict with the powers that be. By then, however, the archbishop had developed a deep concern for El Salvador’s poor, according to Mario Diaz, who emigrated to the U.S. in 1992 and is now also a parishioner of Sacred Heart of Jesus.
Now 42, Diaz was a young boy when Archbishop Romero was assassinated but has since devoured any writings by or about the martyr. Diaz noted that, prior to becoming archbishop of San Salvador, Archbishop Romero had served in the more rural region of Santiago de María, where he witnessed the true plight of the poor.
“There was nothing to eat, they were not getting paid, and they were living like animals,” Diaz said, periodically pulling books off the shelf and searching the Internet for Archbishop Romero’s homilies during an interview in his Highlandtown row home.
Diaz believes, as do many others, that “the spark that turned Archbishop Romero’s internal life with God into action” was the assassination of his close friend, Jesuit Father Rutilio Grande, who had been organizing the poor and oppressed into faith communities aware of their own human dignity.
Archbishop Romero’s most important action, Diaz said, was delivering his weekly homilies in which “he told everybody what was really going on in El Salvador,” including the poverty, torture and assassinations.
Neither Diaz’s nor Quintanilla’s family escaped injustice.
Quintanilla said his father was kidnapped and executed by the left-wing guerillas who were trying to overthrow El Salvador’s military government, which had come to power in October 1979, months before Archbishop Romero’s assassination on March 24, 1980.
“(The guerillas) wanted (my father) to pay a tax, but he didn’t have that kind of money,” Quintanilla said. “He told them, ‘If you want money, go to work,’ and that cost him his life.”
Diaz said he lost four uncles to the violence. A boy then, he nearly lost his own life twice, once by the guerillas and once by the military.
“To make a long story short, you were either on one side or on the other side,” commented Diaz, who had lived in San Gerardo, a pass-through for both the military and the guerillas.
As a young man in the U.S., Diaz came to love and appreciate the legacy of Archbishop Romero because, he said, “he was on God’s side.”
“If you listen to his homilies,” Diaz said, “they applied in those days, they apply today, and they will apply in the future. He really was a prophet for us.”

Panel advising Vatican unanimous that Archbishop Romero is a martyr