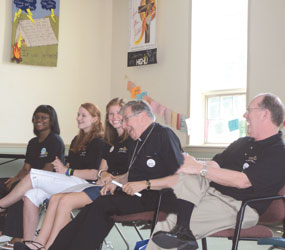 SPARKS – The High School Leadership Institute is a breathless week, and Shelby Kestler learned that lesson well at the Monsignor O’Dwyer Retreat House.

“It’s been crazy,” Kestler, a parishioner of St. Michael the Archangel in Overlea, said July 29. “There’s a lot going on, a lot to do, never a lot of free time. They’re always trying to teach you and get in the most learning possible.”

Indeed, the intensive, annual training program sponsored by the Division of Youth and Young Adult Ministry, aimed to sharpen the leadership capabilities that lingered within the 62 high school-aged attendees. More commonly known as High Li, the program has played a vital role in equipping young people to take the church leadership mantle for decades. The challenges were numerous for the teens, who followed in the footsteps of teenagers who have attended High Li since it was founded in the late 1970s.

The teens were divided into three groups: Source and Summit, Emmaus and Acts 29. Source and Summit trains young people for liturgical roles in a parish or school; Emmaus focuses on peer ministry and Acts 29 works to strengthen parish and school leadership abilities.

St. Cecilia parishioner TyAunna Armstead said, “Stepping out of your comfort zone,” was her biggest, as she did not know many people to start the week. By the end of High Li, she had made strong friendships through the Emmaus track.

“I feel they definitely pushed us to our full potential here,” Armstead said. “If someone asked me what I learned, I could go on and on. I think we got a chance to learn from each track. I have a lot to take back to my parish.”

St. Mark, Fallston, parishioner Jourdan Richard was also on the Emmaus track, learning to truly hear others. Understanding people’s gifts will now come easier to her.

“Hearing is really taking in what someone has to say,” Richard said.

That message was especially apt, as Father John E. Hurley, executive director of the Department of Evangelization, urged the young people to always listen for God’s call to serve during a prayer and reflection time. Father Hurley talked about the joy of following his own vocational call.

Amongst the teens, there was a thirst to gain advice from Bishop Denis J. Madden and Father Hurley.

Bishop Madden was asked during the question and answer session about the leadership role of women in the church. He said Archbishop Edwin F. O’Brien has promoted and hired many women to some of the most influential roles in the archdiocese.

Father Hurley said church leadership is a collaborative effort and women, like High Li director Margaret Brogden, are vital to shaping the church and its future. Lay people, clergy and religious must all work together.

“I think we need to look at roles in the church as less vertical and more horizontal,” Father Hurley said.