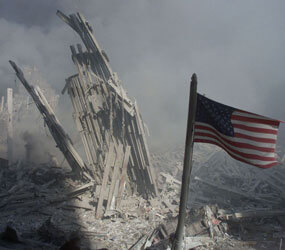 WESTFIELD, N.J. – The phone rang. Diane Starita held her breath and sank to the floor at her home in Westfield.

The voice on the other end of the line was her husband, Anthony. He told her he was trapped on the 106th floor of the north tower of the World Trade Center, surrounded by smoke and flames, desperately trying to find a way out.

“Somehow he found a working phone,” she recalled in an interview with The Catholic Advocate, newspaper of the Newark Archdiocese. “He said: ‘I’m still here,’ meaning he was still in the building. He told me he loved me.”

And then the line went dead.

Anthony M. Starita, 35, was one of 685 Cantor Fitzgerald Securities employees – and 12 Westfield residents – lost on that dreadful day.

Two planes hijacked by terrorists brought down the trade center’s twin towers and killed close to 3,000 people. Others died when a third hijacked plane crashed into the Pentagon and a fourth crash-landed in Shanksville, Pa.. Passengers and crew members on that flight led a revolt that brought down the aircraft, which U.S. officials said was likely headed to the U.S. Capitol.

The anniversary of the attacks is “a day for us to be together as a family,” Diane Starita said during an emotional interview Aug. 25 at Holy Trinity Church in Westfield.

In the late 1990s, she and her husband – along with their children, Kaila and Jason – moved from Staten Island, N.Y., to Westfield and became parishioners at Holy Trinity Parish.

“We’ve all gone on with our lives, but it’s amazing how easily you’re brought back to the memories of that day,” Diane Starita said. “My children and I have a good life, but there are times when it’s hard for me to be ‘in the moment.’ Anthony’s missing, but he’s still with us.”

“We’ve been blessed to share Diane’s burden,” said Monsignor Joseph P. Masiello, Holy Trinity pastor. “She’s allowed us into her heart and her life. Anthony was a man who was dedicated to his family. Through our faith, we come to live with rather than fight against the tragedies of life, and hopefully ever more peacefully.”

“The human side of me wanted to run away and hide,” he confessed. “Everyone was afraid. The fear of the unknown was almost as devastating as the initial loss.”

He cited Deacon Thomas A. Pluta as being his “tower of strength” during this period of turmoil.

As he confronted his fears, Monsignor Masiello began to pray, reciting the words of Jesus found in the Gospel of Matthew: “Come to me, all you who are weary and find life burdensome, and I will refresh you. Take my yoke upon your shoulders and learn from me, for I am gentle and humble of heart. Your souls will find rest, for my yoke is easy and my burden is light.”

“I was humbled by the goodness of our people here at Holy Trinity,” Monsignor Masiello said. “I’m proud to be the pastor of this parish.”

“The community took care of us,” Diane Starita said, expressing her gratitude. “That was the only way we survived. Eight years ago I was just trying to function; just trying to make it through to the next minute. My brother once told me to ‘learn to make friends with the demons.’ I have no answers. I know some day I’ll be reunited with Anthony.”

She said her most difficult task in the wake of Sept. 11 was to tell her children that their father would not be coming home. Eventually, her husband’s remains were found at ground zero.

Though it takes its toll, each year she welcomes the opportunity to tell her story and share her experiences, as a tribute to her husband, as a solemn bearer of history.

“But then, I wake up on Sept. 12 and feel relieved that I got through it again,” she said.