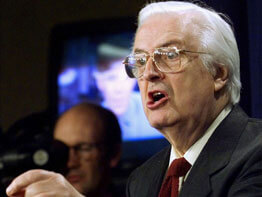 Hyde retired from politics in 2006 after 32 years in Congress and eight years in the Illinois Legislature. He received the Presidential Medal of Freedom, the nation’s highest civilian honor, from President George W. Bush Nov. 5 but was too ill to attend the White House ceremony.

At the ceremony, Bush described Hyde as a “commanding presence” and “a man of consequence,” who impressed colleagues with his “extraordinary intellect, his deep convictions and eloquent voice.”
His son Bob accepted the medal, saying it “affirms the importance and value of his stance on many things, like right to life.”

He was named a Knight of St. Gregory by Pope Benedict XVI in 2006 in recognition of his longtime fight for life.

In 1976, as a freshman congressman, he introduced and successfully persuaded his colleagues to pass the Hyde amendment to an appropriations bill for the Department of Health and Human Services. The amendment restricted the federal government from funding abortions.

Cardinal Francis E. George of Chicago said Hyde “was exemplary in defending and protecting the lives of unborn Americans and, through the amendment that bears his name, promoted freedom of conscience for Americans who believed their tax dollars should not contribute to destroying innocent human life.”

In a Nov. 29 statement, the cardinal also called Hyde “a powerful champion for those who had no voice in the public square,” from the unborn to immigrants.

Rep. Chris Smith, R-N.J., said in a statement that “because of the Hyde amendment countless young children and adults walk on this earth today and have an opportunity to prosper because they were spared destruction when they were most at risk.”

“With malice toward none, Henry Hyde often took to the House floor to politely ask us to show compassion and respect – even love – for the innocent and inconvenient baby about to be annihilated,” he said.

Hyde also supported the Partial-Birth Abortion Ban Act and was present in 2003 when Bush signed it into law.

“Henry Hyde is revered by the pro-life movement for his tireless efforts to protect the innocent, defenseless life in the womb,” said Joseph Scheidler, national director of the Pro-Life Action League, in a statement. “It is a sad day for America. We have lost a truly great statesman and patriot.”

Presenting the documents by which Pope Benedict named Hyde a Knight of St. Gregory in June 2006, now-retired Bishop Joseph L. Imesch of Joliet praised him as “a consistent, steady voice for life” and said, “The church owes you a great deal for that.”

A member of St. Charles Borromeo Parish in Bensenville, Hyde met three times with Pope John Paul II and once with Pope Benedict.

Hyde also was a 52-year member of the Knights of Columbus, belonging to Father McDonald Council 1911 in Elmhurst, Ill., at the time of his death.

Calling his fellow Knight “the epitome of a Catholic gentleman,” Supreme Knight Carl A. Anderson said, “Throughout his long record of service in public office, his faith guided him at every step along the way.”

In addition to his pro-life work, Hyde’s more than three decades in the House included a stint as chairman of the House International Relations Committee. At that time the U.S. committed to investing more than $15 billion to address the worldwide pandemic of HIV/AIDS and established an aid program for poor countries.

“With uncanny skill, determination and grace, he crafted numerous, historic bipartisan laws and common-sense policies that lifted people out of poverty, helped alleviate disease, strengthened the U.S. Code to protect victims and get the criminals off the streets,” Smith said. “He was magnificent in his defense of democracy and freedom both here and overseas.”

Born April 18, 1924, in Chicago, Henry John Hyde earned a bachelor’s degree at Georgetown University in Washington and his law degree at Loyola University Law School in Chicago. He served in the U.S. Navy during World War II and remained active in the Naval Reserve until 1968.

After working as a lawyer in private practice, he was elected to the Illinois House of Representatives in 1967 and became majority leader in 1971. He was first elected to the U.S. House in November 1974 and was re-elected 15 times.

Hyde was married to the former Jeanne Simpson from 1947 until her death in 1992 but admitted in 1998 that he had a four-year affair with a married woman in the late 1960s. According to a report by The Associated Press, he had recently married Judy Wolverton of Illinois.

He also is survived by two sons and a daughter. Another son predeceased him.

Funeral arrangements had not been completed Nov. 30.

Contributing to this story was Kathrynne Skonicki in Joliet.