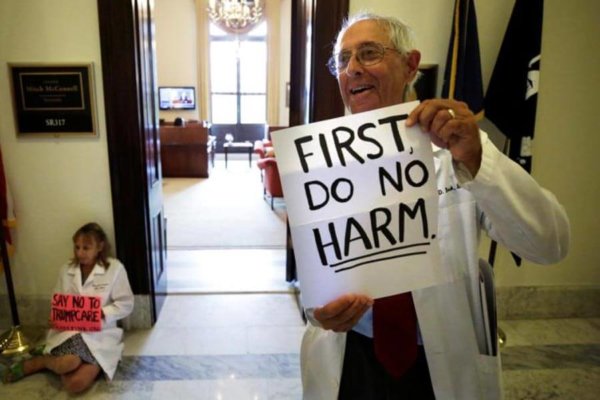 WASHINGTON — After efforts to repeal and replace the Affordable Care Act collapsed late July 17 in the U.S. Senate, Catholic health care leaders said they hope Congress will work together, in small steps, to fix flaws in the current legislation.

The bill lost ground when two Republican senators announced their opposition to it, joining two other senators who opposed the bill and leaving Republican leaders at least two votes short of the 50 needed to start debate on the measure.

Four days earlier, Bishop Frank J. Dewane of Venice, Florida, chairman of the U.S. Conference of Catholic Bishops’ Committee on Domestic Justice and Human Development, said in a statement that the measure, a revision of an earlier draft, still did not have “enough improvement to change our assessment that the proposal is unacceptable.”

“The Catholic Health Association is pleased that the bill in the Senate will not go forward,” said Sister Carol Keehan, a Daughter of Charity, who is president and CEO of the association, adding: “It would have had incredibly negative consequences for so many Americans.”

Dr. Steven White, a pulmonary specialist in Ormond Beach, Florida, and chairman of the Catholic Medical Association Health Care Policy Committee, said that because of the complexity of the heath care legislation, he would hope people would see what happened — when the Senate failed to secure the necessary votes for the health care repeal — as a setback not a failure.

In his July 13 statement about the Senate bill, Bishop Dewane also referred to his June 27 letter to senators that said any health care reform bill must uphold several moral principles: affordability; access for all; respect for life; and protection of conscience rights. The bishops also have stressed the need for U.S. health care policy “to improve real access” to health care for immigrants.

In a July 18 statement, Sister Keehan said Congress can “now turn a page and open a new chapter” stressing that the country deserves a health care bill that gives quality and affordable health care to everyone.

The Congressional Budget Office said the Senate bill would leave 18 million more people uninsured within a year, and 32 million fewer people would have coverage in 2026, compared with the number of those insured under the current law. Health insurance premiums also would increase by at least 20 percent within the first year and would likely double by 2026.

The bill would have done away with the Affordable Care Act’s expansion of Medicaid and subsidies for the purchase of private insurance, but it would have left in place requirements prohibiting insurers from denying coverage or charging higher premiums because of a pre-existing medical condition.

Sister Keehan, who was consulted on the initial Affordable Care Act legislation, said moving forward will require bipartisan efforts and broad consultation. “There is the competence and resources to do this if we work together. Health is too critical to be allowed to be a partisan issue,” she said, adding that CHA “stands ready to work with all members of Congress to achieve this.”

The woman religious, who is a nurse and heads an organization of more than 600 hospitals and 1,400 long-term care and other health facilities in the United States, also said her organization would “definitely not support a bill that repeals but delays replacement” of the Affordable Care Act because it would create “incredible uncertainty.”

“Health care is too critical to put at that much risk,” she added.

White told Catholic News Service July 18 that members of Congress need to “get together and view in incremental steps what they can do” acknowledging that fixing flaws in the Affordable Care Act “can’t all be done at once.”

He said one aspect of the reform efforts — Medicaid cuts — is not fully understood. As he sees it, the expansion of Medicaid under the ACA is currently hurting state budgets, so some type of reform is necessary.

He also stressed that any future health care legislation that comes before Congress must include conscience protections that he said are “absolutely essential.”

Three days before the Senate plan was stopped in its tracks, Sister Keehan said she hoped more senators would take a stand against the proposed legislation. The next step would be for “Democrats and Republicans to show they can be statesmen and women and come together — not gloating or finding fault but looking to stabilize the Affordable Care Act for now and to look at what might be better in the future.”

On the Senate floor July 18, Senate Majority Leader Mitch McConnell, R-Kentucky, said: “I regret that the effort to repeal and immediately replace the failures of Obamacare will not be successful. That doesn’t mean we should give up. We will now try a different way to bring the American people relief from Obamacare. I think we owe them at least that much.”