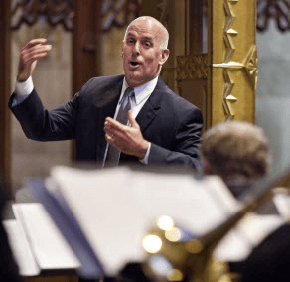 In his new role as director of music ministry for archdiocesan celebrations, Douglas Byerly is focused on harmonious teamwork.

“My goal is to really continue the collaborative nature of archdiocesan celebrations,” said Byerly, who added he wants those involved in music ministry to be from all parts of the archdiocese, from Garrett to Harford to Anne Arundel counties.

“It’s important to Archbishop (William E.) Lori to have a director of music who understands his vision of what liturgy should feel like so it’s clearly communicated to the musicians,” said Byerly, who began the job Nov. 1.

Celebrations include World Marriage Day Mass Feb. 10, chrism Mass, confirmations and ordinations, liturgies typically held at the Cathedral of Mary Our Queen in Homeland or the Basilica of the National Shrine of the Assumption of the Blessed Virgin Mary in Baltimore.

“Music plays such an integral part of the liturgy,” Byerly said. “For most people, the experience they have at Mass is intensified by great music.”

“I’m a firm believer in the more the merrier,” he said.

Byerly, who has been involved with music ministry at church since childhood, called his continued involvement a “natural outgrowth.”

For the past 20 years, Byerly has been the music director at St. John the Evangelist, Hydes.

“A music director has to be a good liturgist,” said Byerly, a Towson resident who is married with two children. “I love what I do. I hope to continue to build on that.”

Byerly is chairman of the Performing Arts department, a professor and coordinator of music at Anne Arundel Community College in Arnold and director of choirs at Washington College in Chestertown.

Frank Rosenthal, a choir member at St. John, Hydes, said Byerly is “an extraordinarily talented musician who also has a unique ability to pull together various skill levels and blend them together to sound wonderful.”

Rosenthal added that Byerly “has a very strong appreciation and working knowledge of the liturgical importance of the music. The archdiocese is going to benefit from that same liturgical experience that St. John’s has been blessed to have over the years.”