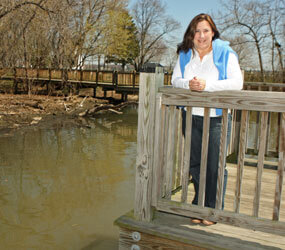 Growing up as a parishioner of St. Patrick, Havre de Grace, Mary Ann Lisanti learned to have a deep appreciation for the beauty of creation around her.

“It is such a gift that we have,” Lisanti said.

Lisanti, 41, serves as executive director of the nonprofit organization, the Lower Susquehanna Heritage Greenway, which will hold the April 24 River Sweep around Harford and Cecil counties. The event helps clean up tributaries to ensure debris and trash that have accumulated during the winter are removed. The Susquehanna sits atop the Chesapeake Bay, Maryland’s crown jewel.

“It’s really something everybody in the community can do,” Lisanti, also a Harford County councilwoman, said. “People come from other communities throughout the region because they have a greater understanding today, more so than they did 10 years ago.”

River Sweep marks its own decade of service as Earth Day celebrates its 40th anniversary April 22.

Previously, the idea of being environmentally friendly would often be accompanied with dismissive terms like “tree hugger.” The last couple of years have brought an excitement about the topic, especially after nudges from popular culture and celebrities.

“Everybody’s going green,” Lisanti said. “I think the heightened awareness, through education and popular culture has really helped to sow the seeds that we’re residents of this planet and it’s our responsibility to take care of it.”

Lisanti’s organization builds recreational trails with the goal of economic growth through the creation of linkages between nature, history and cultural resources.

“[The River Sweep] is a natural event for us,” Lisanti said. “My board of directors and I tried to come up with a signature event in the early days when we could celebrate Earth Day. It was a unique time because it’s the height of awareness.”

In recent years, there have been between 400 to 500 volunteers, many of them children, participating in River Sweep, which covers a 40-mile area.

“We expect to exceed that,” Lisanti, a graduate of Baltimore’s College of Notre Dame, said. “We expect 6-700 this year.”

This year, there will be three primary meeting locations on the morning of April 24, including the Community Park and Boat Launch in Perryville, Marina Park in Port Deposit and Tydings Park Gazebo in Havre de Grace.

The event creates environmental stewardship awareness among young children. In many ways, however, the children are teaching adults a thing or two about conservation. It’s reflected each year at River Sweep.

“So many people say, ‘I’m here because of my kids,’ ” Lisanti said.