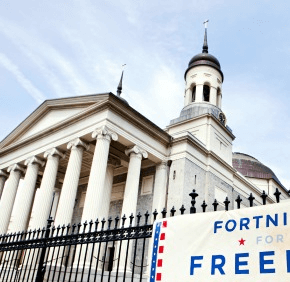 By Father Jesse Bolger
Pastor of St. Clare, Essex
JBolger@archbalt.org
On a recent trip into Baltimore, I was driving down Route 40. Immediately after passing The Johns Hopkins Hospital, I could not help but recognize two buildings that stood out: Mercy Medical Center, and the Basilica of the National Shrine of the Assumption of the Blessed Virgin Mary, America’s first Catholic cathedral.
As I approached these impressive architectural structures, I asked myself, “Are these buildings destined to become symbols of the past, or are they lasting landmarks of religious liberty, more relevant than ever?”
As we prepare to mark another Fortnight for Religious Freedom in union with Catholics and all people of good will throughout this country, I suggest that these two buildings symbolize the intent and meaning of the principle of religious liberty, enshrined in the First Amendment of the Bill of Rights, and must therefore be preserved as lasting landmarks of religious liberty.

In 1806, Bishop John Carroll laid the cornerstone of the new basilica. (file photo)

This year marks the 225th Anniversary of the Archdiocese of Baltimore, which was established as a diocese Nov. 6, 1789. That same year, James Madison drafted Constitutional amendments, in response to representatives of particular states requesting stronger language protecting individual liberty, including religious liberty. By 1791, the Bill of Rights was ratified, and established as law.
The First Amendment reads in part, “Congress shall make no law respecting an establishment of religion, or prohibiting the free exercise thereof.”
For Catholics living in Maryland in the 18th century, this amendment to the Constitution was a welcome addition, as there was a time when publicly practicing the Catholic faith in Maryland was a crime, which leads me to the current crisis we are facing once again as Catholics in America. Whether it is the Little Sisters of the Poor or the Christian-owned company Hobby Lobby, both of whom have taken their case against the Federal government to the Supreme Court, the Federal government in recent years has enacted laws in violation of religious liberty.
For instance, the HHS mandate requires employers to provide contraceptive and abortifacient coverage to employees, with such a narrow religious exemption that the Little Sisters of the Poor are not protected – unless they sign a waiver giving a third party permission to provide such coverage, which also violates their religious liberty.
What is so discouraging in all of this, is that the American experience has shown that the Catholic Church has been able to exist and even flourish in this great country not only in providing sacramental care for the faithful, but also physical care through her many social services to the larger community. The history of Mercy Medical Center illustrates that point.
In 1874, Mercy Sisters took charge of what was then Baltimore City Hospital. For 140 years, the Sisters of Mercy, supported by an exceptional staff of committed health care professionals, have provided care to those in need, through the lens of our Catholic faith. The mercy of God has been experienced by so many individuals, through the spiritual and physical care given at Mercy Medical Center. Similarly, the Basilica of the Assumption of the Blessed Virgin Mary continues to be a place of welcome for all, while at the same time witnessing to the American Catholic experience.
What will the view from Route 40 look like over the next 225 years driving into Baltimore? Only God knows. We hope these two fine buildings will remain – unless our blessed Lord returns in glory, and the new heavens and earth are established – but what about the role of the Catholic Church in America and specifically here in Baltimore? Will these buildings merely be a symbol of the way things used to be, or will they remain a lasting legacy of religious liberty?
Like Bishop John Carroll, the first Bishop of Baltimore, and St. Elizabeth Ann Seton, the first American-born saint, who served in Emmitsburg, may we witness to our faith, not only on Sundays, but every day, as faithful citizens. Let us pray that Mercy Medical Center and the Baltimore Basilica will always remain active, working symbols of religious liberty.
Also see:
Archbishop Lori dedicates new church for 200-year-old Buckeystown parish
‘A pastoral priest’ – Baltimore’s Bishop Newman marks 60 years of priesthood
New biography celebrates Mother Seton’s tenacity
PrevNext