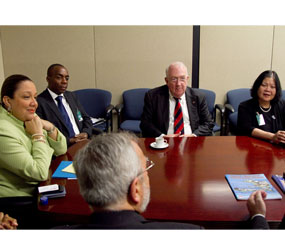 PORT-AU-PRINCE, Haiti – The first lady of Haiti and the next president of Catholic Relief Services had an exchange Oct. 25 that went directly to how CRS is responding to the basic needs of the most impoverished nation in the Western Hemisphere.

“One project I would really like to visit is sanitation,” said Sophia Martelly, whose husband, Michel Joseph Martelly, took office in May. “Only 40 percent of the Haitian population has access to a latrine.”

“I have a latrine photo on my iPhone,” said Carolyn Woo, handing the device to Martelly and sharing images she captured that morning, when CRS leadership visited the densely-packed neighborhood of Solino, where CRS has overseen the construction of more than 400 transitional shelters and a commensurate number of latrines to serve some 700 families.

WASH (water, sanitation and hygiene) projects were vital before the Jan. 12, 2010, earthquake that leveled large swaths of Port-au-Prince, including the national palace.

Martelly received a CRS delegation in a temporary office space, next to the ruins of the palace.

In addition to Woo, she met with Bishop Gerald F. Kicanas of Tucson, Ariz., the chairman of the board of directors of CRS; Ken Hackett, its longtime president, who is retiring at the end of the year; Haiti Country Representative Luke King; Annemarie Reilly, vice president for overseas operations; and Schuyler Thorup, regional director for Latin America.

Martelly was most interested in, and CRS leaders were most eager to share, the agency’s commitment to subsidiarity – that people who are closest to the problem, as its materials state, “have a better understanding of the issue.”

Sending more than $108 million to Haiti in assistance over the 18 months after the earthquake, CRS has employed some 20,000 nationals in a cash-for-work program and trained more than 300 small entrepreneurs.

“We had a chance,” Bishop Kicanas said, “to see that today, a tailor, a baker.”

“And those people have employees, too,” Hackett added.

Plans for the reconstruction of St. Francis de Sales Hospital in Port-au-Prince reflect how CRS wants to, as Woo put it, “give beyond money and transfer know-how.”

CRS, the Catholic Health Association and Sur Futuro, a foundation in neighboring Dominican Republic, are among the entities partnering with the Archdiocese of Port-au-Prince in the construction of a $10 million, 200-bed teaching hospital.

Construction is scheduled to begin in three months, and conclude in January 2014, a two-year frame that Hackett described as “awfully ambitious.”

The educational component will come in the form of expanding an existing partnership between University of Notre Dame of Haiti’s medical school and the University of Maryland School of Medicine.

Martelly was pleased to learn that the steering committee for the project is headed by Dr. Jude Marie Banatte, a native of Haiti and CRS employee since 1999.

At the grass-roots level, CRS’ post-earthquake response has focused on moving residents out of tents in resettlement camps and back into communities such as Solino, where beneficiaries remove, crush and recycle rubble for use in concrete foundations; unload pre-fabricated frames and walls prepared by 126 nationals for their T-shelters, and clear trash.

“I think it’s about time Haiti takes responsibility for its own,” Martelly said, “and having Haitians participate in the reconstruction is definitely a positive message.

“Although we do need assistance from foreign countries and friends, Haitians need to bring out their talents and put them to use for their country.

“We have a lot of talented Haitians, but most of them go abroad and they use their talents for other countries, because they don’t have the opportunities here,” the first lady said.

“The money that goes into the school food program could stimulate production locally,” Woo noted.

Many of those departments receive additional assistance from some 400 parishes in the United States, including 19 in the Archdiocese of Baltimore.

Hackett invited Martelly to give the keynote address at a Solidarity with Haiti conference that will be held at The Catholic University of America next June. Parish involvement will be a focus of the conference.

“We want to encourage them (American parishes) to look more at sustainability,” King said, “not just making a donation.”

In the wake of an earthquake death toll estimated between 80,000 and 230,000, and hundreds of thousands more displaced, Baltimore-based CRS ramped up its efforts in a nation it has served since 1954.

Among private organizations in the United States, according to CRS, only the Red Cross surpassed the more than $200 million raised in earthquake relief by the agency which carries out the commitment of the U.S. bishops to assist the most vulnerable overseas.

“Not to get preachy,” Hackett said, “but it grows out of what we believe.”

Note: Catholic Review Managing Editor Paul McMullen is reporting on his travels with a CRS delegation in Haiti. His accommodations in Port-au-Prince were provided by Catholic Relief Services.