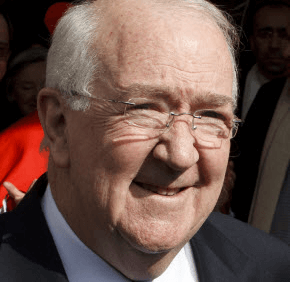 By Paul McMullen
pmcmullen@CatholicReview.org
Promoting peace and freedom to worship, alleviating poverty and improving his grasp of the Italian language are some of the items atop Ken Hackett’s to-do list as he prepares to become the U.S. ambassador to the Holy See.
In mid-June President Barack Obama nominated Hackett, who was president of Baltimore-based Catholic Relief Services from 1993 to 2011, to the ambassador post. Hackett was confirmed by the U.S. Senate Aug. 1.
He and his wife, Joan, former parishioners of St. Louis, Clarksville, and the Cathedral of Mary Our Queen, Homeland, will take residence in Rome Sept. 19. Shortly thereafter, Hackett will present his credentials to Pope Francis.
“We’re excited,” Hackett told the Catholic Review Aug. 7, when he was in Washington, D.C., undergoing intensive briefing at what he called “ambassador school.”
Earlier that day, Secretary of State John Kerry announced the formation of the Office of Faith-Based Community Initiatives.
“The idea is nothing new, but it is new to the State Department,” Hackett said. “It sends a message, we’re going to engage with religious leaders, of whatever faith. It is a strategic priority. To quote Kerry, ‘Not to engage religious leaders is done at our peril.’
“We talked about engaging religious leaders, in preventing, mitigating and resolving conflict. Religious leaders can be sources of great credibility and strength. … Diplomats historically don’t recognize the importance of faith leaders. I am happy to be in the vanguard of that.”
Acknowledging that “there are those who would use their religion as an improper justification for their violent extremism,” Hackett repeatedly mentioned Kerry’s focus on the Middle East, where Egypt, Syria and other nations search for stability.
“Conditions for Christians and other minorities,” Hackett said, “that looms large.”
Besides increasing tolerance of religion, what are Hackett’s other priorities? Some of the issues he listed were the same ones he took on during his 40 years with CRS.
“Poverty alleviation, sustainable development, climate change, human rights, with its subsets of trafficking and geographical issues,” he said. “Those are all issues I am going to be engaged in.”
Asked about his fluency in Italian, Hackett said “It’s coming, little by little. After Labor Day, there will be some intensive weeks of training.”
One of the first relationships Hackett will renew in Rome will be with Cardinal Edwin F. O’Brien, archbishop emeritus of Baltimore and Grand Master of the Equestrian Order of the Holy Sepulcher of Jerusalem, which preserves and propagates the Catholic Church in the Holy Land.
Hackett worked with Blessed John Paul II and Pope Benedict XVI, the former particularly on his 1995 visit to Baltimore, but has never met Pope Francis. Hackett was educated at Jesuit institutions from his parish school in Massachusetts to Boston College, and since being nominated has taken a keen interest in the first Jesuit pope.
“My friends of all faiths are taken with him,” Hackett said. “He is absolutely carrying the right message. He is not only humble and simple, he is profound. He has the Jesuit quality, right to the point.”
Also see:
Mount St. Joe’s Norton trades dugout for front office
PrevNext