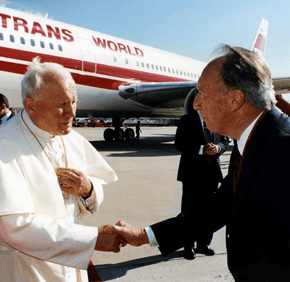 By Elizabeth Lowe
elowe@CatholicReview.org
Philanthropist Willard Hackerman, president and chief executive officer of Whiting-Turner Contracting Co., is being remembered in the Archdiocese of Baltimore as a generous supporter of Catholic education.
Hackerman, who was Jewish, died Feb. 10 at age 95.
Since 1996, Whiting-Turner has given more than $1 million to Catholic schools in the archdiocese, primarily for tuition assistance scholarships, said Matthew Anthony, director of development for the archdiocese.
According to Anthony, Whiting-Turner made a six-figure gift to kick off the archdiocesan Partners in Excellence scholarship program, founded in 1996 by Cardinal William H. Keeler.
“It all starts with his relationship with Cardinal Keeler,” Anthony said. “The two of them were very, very close. The handful of times I was a part of meetings between Mr. Hackerman and the cardinal, the shared faith between the two of them was incredible, inspirational, and you could see the high regard Mr. Hackerman had for the cardinal. It was evident in everything said and done.”
“He totally understood the mission of Catholic schools,” Anthony said. “Mr. Hackerman was a very good and kind man. You saw it in everything he did.”
Hackerman was among the first to welcome Pope John Paul II to Baltimore in October 1995.
In 1938, Hackerman, an engineer from The Johns Hopkins University in Baltimore, joined Whiting-Turner as a superintendent, according to the Baltimore-headquartered company’s website. In 1955, Hackerman was named the firm’s president.
Whiting-Turner’s projects have included the University of Baltimore’s School of Law building, Joseph Meyerhoff Symphony Hall, the National Aquarium and many structures in the archdiocese.
See also:
Daughters of Charity have new home on St. Agnes Hospital campus thanks to Baltimore philanthropists
Bishop Ricard helps Oblate Sisters commemorate Mother Lange
PrevNext