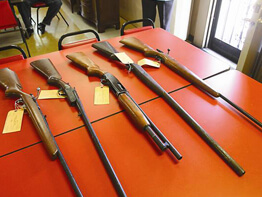 UPDATED
For the second time since May, St. Gregory the Great collected guns July 21 to get them off of the street in response to an escalating violent-crime rate in the city. The Baltimore City parish expects to hold two more firearm compilations before the year is out.
It’s a growing trend for religious communities of many denominations throughout Baltimore to not only pray for an end to violence, but to be proactive in reducing a murder rate that is on course to surpass 300 by the end of 2007.
“As a parish, we feel like we need to get involved to make our community and city safer,” said Monsignor Damien Nalepa, pastor of St. Gregory the Great, whose parish collected three handguns, four rifles and a sawed-off shotgun July 21. “The problems in the city are our problems.”
The parish plans to hold its next gun collection Sept. 1, Monsignor Nalepa said.
Empowerment Temple AME Church in Bolton Hill has also held a gun turn-in this year and has participated in a coalition of city churches – including Macedonia Baptist and St. John’s AME – in holding numerous anti-violence rallies throughout Baltimore.
St. Bernardine, Baltimore, held a gun collection earlier this summer and a peace assembly in the spring, and St. Frances Academy transformed its literacy youth camp this summer into a peace camp in an effort to teach children how to resolve differences in a nonviolent manner.
The faith communities are deeply invested in the city and want to do their part to make it safe for all of its citizens, Monsignor Nalepa said.
“The need for us to do our part is ever so great, with a murder rate that has risen above 175 so far this year,” he said.
“The city is better off when any organization chooses to take a stand against the violence, but particularly religious organizations because of their loyal following,” said Shaun E. Adamec, a spokesman for Baltimore City Council President Stephanie Rawlings-Blake. “As a deeply spiritual person, the council president relates with other religious followers in their desire to make the streets safer for this and future generations.”
Baltimore hasn’t had this kind of murder spike since 1999 – the year Martin O’Malley became mayor – and Mayor Sheila Dixon responded to the violence July 18 by asking for, and receiving, the resignation of Baltimore City Police Commissioner Leonard D. Hamm.
When church leaders at St. Gregory the Great offered $50 to each of the 17 citizens who voluntarily brought handguns and rifles to its rectory last May and eight in July, they hoped it would keep the firearms out of the hands of would-be violent offenders.
Monsignor Nalepa approached William H. Murphy Jr. – a prominent lawyer – to fund the reward money and was overwhelmed with the undisclosed amount of money this non-Catholic gave for the cause.
“He gave us enough money so that we can hold these gun collections at least two more times this year,” he said. “Most of the people who have turned in the guns just wanted to get them out of the house so they wouldn’t get into the wrong hands.”
The guns collected so far have all been turned over to city police.