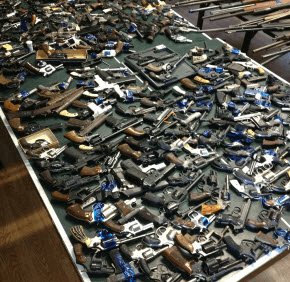 Klein’s ShopRite of Maryland, a grocery store chain run by a family with ties to The John Carroll School in Bel Air, sponsored an anonymous gun buyback program Dec. 15 in Baltimore City, the day after a mass shooting in Newtown, Conn. that killed 26 people.

The 461 weapons collected, which came from across the state, will be destroyed by Baltimore City Police. A $100 ShopRite gift card was given for every firearm turned in. The buyback had been scheduled prior to the massacre.

“I think there was a heightened awareness due to the tragedy in Connecticut,” said Michael J. Klein, vice president of Klein’s ShopRite, a 1973 John Carroll graduate and former John Carroll trustee, in a statement. “People seemed aware of the danger of having guns in the home. Perhaps more significant, it was obvious to me that a lot of the people who brought the weapons in were not educated in gun safety or safe weapon handling. There were a number of guns turned in that were still loaded.”

Klein’s ShopRite may sponsor additional programs in Harford County where six of its eight stores are located.

“This is just one aspect of what the Klein Foundation does for the communities,” said Andrew P. Klein, president of Klein’s Shoprite, a 1971 graduate of John Carroll and a former John Carroll trustee, in a statement. “Thanks to Saturday’s success, we hope to now talk with some major Baltimore-area foundations about partnering with us in the future to benefit the people. Our Klein’s Family Foundation raises funds just so that we can present these types of community awareness and initiative programs.”