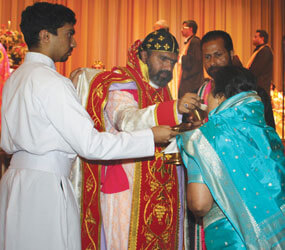 UNIONDALE, N.Y. – The flock of Syro-Malankara Catholics who emigrated from India to New York in 1984 was as small as a mustard seed, but the group has rooted and grown like a mulberry tree nourished by grace, said Bishop William F. Murphy of Rockville Centre.

He spoke at the Oct. 3 installation of Bishop Thomas Naickamparampil, the first bishop of the newly established exarchate for the Syro-Malankara Church in the United States. More than 1,000 people participated in a festive liturgy at Kellenberg Memorial High School in Uniondale to celebrate the exarchate and its new bishop.

Bishop Murphy said the local branch of the Syro-Malankara Catholic Church was a gift from India, called into being by divine love, and it will “flourish in the soil of America and become indigenous here.”

An apostolic exarchate in the Eastern Catholic Church is the equivalent of an apostolic vicariate in the Latin Church and is created by the Vatican for the pastoral care of Catholics living outside the territory of the Eastern church to which they belong.

Bishop Naickamparampil, who will be based in New Hyde Park, is also the apostolic visitor for Syro-Malankara Catholics in Canada and Europe. He was born in Kerala in 1961, ordained a priest in 1986 and holds a doctorate in philosophy from the Pontifical Gregorian University in Rome.

The installation began with an outdoor procession, led by young women clad in red blouses and white saris, bearing candles and flower petals. Musical accompaniment was provided by men playing tall “chenda” drums and bow-shaped horns. Sixty Eastern- and Latin-rite clergy approached the altar, which was draped with red and green cloths and set up on the stage at the school auditorium.

Archbishop Baselios Cleemis Thottunkal of Trivandrum, India, major archbishop of the Syro-Malankara Catholic Church, was the main celebrant. He and his concelebrants, who included New York Archbishop Timothy M. Dolan, offered Mass in spoken and intoned English and Malayalam, a language common in southwestern India. Altar servers rang bells and shook pole-mounted metallic discs to call attention to the most solemn parts of the liturgy.

The installation of Bishop Naickamparampil took place after Bishop Murphy’s homily. After the reading of the papal bull establishing the exarchate and appointing its leader, the new bishop was enthroned. Wearing red brocade shoes and seated on an upholstered armchair, he was lifted three times by six priests representing different ministries of the eparchy. Each time he was raised into the air, the congregation cried, “Oksiyos!” (“He is worthy!”).

After Mass, Archbishop Thottunkal thanked the U.S. Conference of Catholic Bishops and its president, Cardinal Francis E. George of Chicago, for their strong and generous support, calling it “a beautiful expression of Christian fraternity, Catholic openness and ecclesial solidarity.

Archbishop Francis Chullikatt, the Vatican’s permanent observer at the United Nations, called the Syro-Malankara “a very dynamic church in the Catholic communion” and said the universal church is strengthened by it. He said the establishment of a new exarchate “shows Pope Benedict’s paternal care and pastoral solidarity for Syro-Malankara Catholics in the United States.”

Bishop Naickamparampil said the identity of the Syro-Malankara Catholics is Indian in its basic cultural allegiance, guided by Gospel values and expressed in an Eastern way, reflecting its ancient Malankara Syrian ecclesial patrimony.

“All these cultural, religious and ecclesial elements take their concrete expression in the complex American social context,” he said.

The bishop said it is his duty to help Syro-Malankara Catholics give Christian witness and enrich the American culture with their ecclesial presence. He said they should pursue a mission of unity in their families, parishes, churches and “with every element in this beautiful universe.”

Describing the challenges of establishing the church community in a new country, he said: “The values and lifestyle of our first-generation immigrants have to be respected and attended to. At the same time, we have to be deeply aware of the cultural context in which our second- and third-generation faithful are growing up and defining their value system.”

He pledged to cater to the needs of youths, saying the future of the exarchate depends on their involvement.

“It would be a sin to live within narrow ghettoes” in a country that welcomes every culture, every religion, every ideology and every tradition, he said. He urged the congregation to “assume the maximum possible openness to everything that is good around us” and be at the service of all that is “good and human.”

Syro-Malankara Catholics began to migrate to the United States in 1984, settling first in the New York area. Today, the church has 16 parishes and 15 missions in North America, served by 30 priests and 34 women religious.