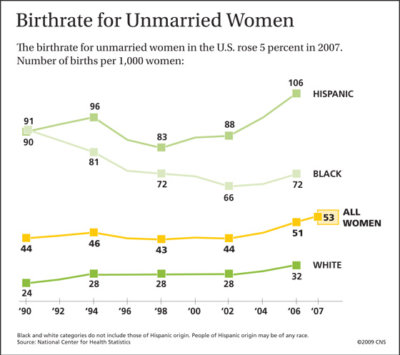 WASHINGTON – A recent federal report showing a rise in U.S. births in 2007 also revealed another statistic: 40 percent of the births were to unwed mothers.

That statistic did not go unnoticed, especially by Catholic leaders who stress that the church’s teaching exphasizes the important link between marriage and parenthood.

According to the report, issued in late March by the National Center for Health Statistics, 4.3 million babies were born in 2007 – more than in any other single year in U.S. history. The number of births to unwed mothers reached its highest level at more than 1.7 million. Although 25 percent of these births were to teen mothers, the rest were to women in their 20s through their 40s.

The data reflect an overall trend and something society has come to accept more than it did in previous generations, said S. Philip Morgan, a sociology professor and fertility researcher at Duke University in Durham, N.C.

Mr. Morgan told Catholic News Service April 1 that the rise in the number of unwed mothers has occurred for several reasons. For starters, he said the “shotgun wedding solution to a premarital pregnancy” is no longer seen as necessary or something that leads to a lasting marriage.

He also said the debate about abortion has “changed the social stigma” of having a child out of wedlock. “Young pregnant women can carry their babies with pride in a way they couldn’t in the ’50s and ’60s,” he said. Mr. Morgan said the pro-life movement in particular has emphasized that it “shows strength, courage and valor to have a baby.”

Another factor is that “women have dramatically postponed” marriage until later in life or have ruled it out altogether, he said.

In the face of these trends, the Catholic Church offers a countermessage, urging people to see and value the link between marriage and parenthood.

John Grabowski, associate professor of moral theology at The Catholic University of America in Washington, said the church stresses this connection based on natural law and Scripture. But in recent years, he said, this view also has been supported by studies from social scientists demonstrating that “children are much happier and much better cared for in a stable marriage.”

But clearly not everyone is buying the message, in part because it gets “a lot of competition from today’s culture,” Grabowski said.

He told CNS that the church’s teachings on marriage are prevalent in the writings of Pope John Paul II and can be found in parts of the U.S. bishops’ National Pastoral Initiative for Marriage with its public service announcements and Web site with suggestions to strengthen marriages: www.foryourmarriage.org.

Mary Jo Pedersen, former family ministries specialist at the Family Life Office in the Archdiocese of Omaha, Neb., said the bishops’ marriage initiative and diocesan family life programs are key ways the church is stressing the value of married life.

Ms. Pedersen, who retired last year after 25 years in family ministries, said the church walks a fine line pastorally when it highlights the role of married couples in shaping children while also addressing the many contributions of single parents.

The bishops similarly addressed this issue in their 1991 pastoral, “Putting Children and Families First: A Challenge for Our Church, Nation and World.”

“We support and applaud the often heroic efforts of single-parent families,” they wrote in the statement, adding: “We also emphasize the value of parents staying together and sacrificing to raise children. Children generally do best when they have the love and support – personal and material – of both their parents.”

Ms. Pederson, who wrote the 2008 book “For Better, For Worse, For God: Exploring the Holy Mystery of Marriage,” is convinced that married couples teach children about God just by their daily example of loving each other and showing forgiveness and commitment.

“Without doing anything extra,” she said, “parents’ lived example teaches children of God’s faithful love … which is why the church says marriage is the best way to form children in the image and likeness of God.”

Ms. Pedersen said Catholics need to gain a deeper awareness of both the responsibility and blessings of marriage. She said she hopes that message will be emphasized more in high school religion and religious education curricula so youths would better understand what married life is meant to be.