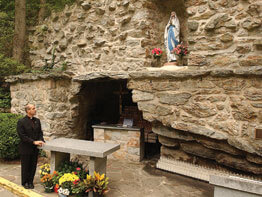 When a group of ninth graders disembark at the National Shrine Grotto of Lourdes, Emmitsburg, for a day-long retreat Nov. 9, they will have an opportunity to breathe in fresh air, take in the magnificent mountaintop scenery and achieve a spiritual cleansing.

Calling the 200-year-old grotto “a mystical mountain and sacred place where saints have walked and lived,” retreat leader Father Jack Lombardi said the Western Maryland setting allows the thousands of pilgrims who visit the site each year to “experience God’s magnificent beauty and creation in the Blue Ridge Mountains.”

The original grotto was established in 1807 by Father John Dubois near the newly erected St. Mary’s on the Hill, and St. Elizabeth Ann Seton found peace at the site after she arrived in Emmitsburg in 1809.

At the request of Pope Paul VI, Cardinal Lawrence Shehan proclaimed the Grotto of Lourdes a public oratory in 1965 with the title “National Shrine Grotto of Lourdes.”
Today, more than 100,000 pilgrims annually travel to the Emmitsburg shrine to pray and meditate in a quiet, peaceful atmosphere.

“We are half in the sky, the height of our situation is almost incredible,” Mother Seton is quoted as saying about the grotto.

The present-day grotto is one of the oldest American replicas of the Lourdes shrine in France, built about two decades after the apparition of Mary at Lourdes in 1858, said Father Lombardi, chaplain of the Emmitsburg grotto.

In recent times the grotto has been spruced up. A dozen or so people who say they have been healed of illnesses after praying at the shrine have contributed many of the statues that stand on the site.

One of the acquisitions includes a statue of the Divine Mercy of Jesus that once stood in the bedroom of St. Faustina Kowalska, which now rests safely inside the Corpus Christi Chapel.

“The particular offerings of the retreat here are family virtues, and a peaceful grace that helps inspire people toward holiness,” Father Lombardi said. “It’s a spiritual cleansing and people say daily how peaceful it is here. Just driving here can release all of your tension.”

Day-long and morning retreats are offered, leaving pilgrims with good-lingering feelings, said Father Lombardi, an avid surfer who equates riding a wave to the sensation one takes away from a visit to Emmitsburg.

“Both are part of God’s creation and bring you closer to his world, filling your mind with joy and peace,” he said, “where other things, like eating potato chips, don’t always leave us with good-lingering effects.”

“We try to address each of those independently and together,” he said. “We invigorate the body by eating right, and exercise with hiking. We feed the mind with meditation and contemplation and thought process important to attune to higher realities, God and spiritual ways. As for the soul, we have a supernatural element to us, given by God at conception that we want to nurture with the holy Eucharist and the sacraments and to become more aware of it in this busy world.

“The retreat itself allows you to take time to do all of this,” Father Lombardi said. “Our souls were designed for union with God and one another and others.”

For more information about retreats at the grotto, visit the Web site at www.msmary.edu/grotto/.