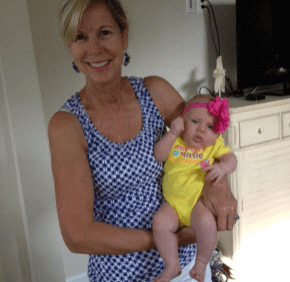 By Jennifer Williams
jwilliams@catholicreview.org
Kelly McCone was in the hospital, shortly after the arrival of her son, Liam, when she remembers her father-in-law asking her dad what he wanted to be called.
“He quickly decided on “Pop Pop,” said McCone, a parishioner of St. John the Evangelist, Severna Park, who, with her husband, Sean, now has three children ranging in age from 7 months to 7. “I am pretty certain he chose the name because he had a “pop” who he loved so much.”
As for McCone’s mother, it was Liam who determined that she would be called “Gee-Gee,” because that’s what came out when trying to pronounce the word grandma.
“My mom thought it was perfect because it came from him,” McCone said.
While many seniors stand by traditional monikers, many others don’t see themselves as the “gray-hair-and-rocking-chair” grandparents of yesteryear.
“We told my parents to think about it because they don’t look like they’re grandparents,” said Julie Gettier, who, with her husband, Matt, has an infant daughter, Presley. “They’re young and attractive. They’re excited to be grandparents, but they don’t look it.”
So her mom settled on Meem, which is what Gettier called her late grandmother.
“My sisters and I really encouraged her that that would be the right name,” said Gettier, who attends St. Mary in Annapolis. “My dad wanted something really fun, so he’s ‘G-Daddy.’ I’ll catch him walking around with Presley saying ‘I’m your G-Daddy.’”
Her husband’s father goes by “Bose,” a family name, while his mother has chosen to be called “Bobbi,” which is what Matt used to call things that were special to him when he was younger, such as his “blankie.”
St. Mary, Annapolis, parishioner Linda Bowman’s first grandchild belonged to her step-son.
“I knew they had grandmothers on the other side, so I chose ‘Meme,’ the French word for grandmother,” she said. “But when my daughter had her first child, she said, ‘Mom, we want you to be ‘Gigi.’ It stands for gorgeous grandmother.’”
So now she is Gigi to her eight grandchildren, who range in age from 2 months old to 15 years.
“I think it’s kind of cute actually,” she said.
Her husband goes by “Bopbop,” which one of the grandson’s started calling him.
But should grandparents not want to be called “Glam-ma,” as actress Goldie Hawn has chosen, or “Gaga,” as Camilla, the Duchess of Cornwall,” wishes to be called, the traditional works too.
“My parents are Grandmom and Pop,” said St. Margaret, Bel Air, parishioner Joe Tiburzi, who with his wife, Stacey, has two sons, ages 4 and 2.
Stacey’s parents chose to be called “Pop-Pop” and “GiGi.”
Kelly McCone’s husband’s parents also went traditional, choosing “Granddad” and “Grandmom,” although some of the younger children call her “Gaga.”
As an AARP article noted, “There’s no end to the possibilities. Little Gideon can go fishing with his Poppy, G-Pa, Grumpy or Grampcracker, while Baby Beatrice can snuggle with a Bampy, a Beeba, a Boosh or a Boompa.
Also see:
Former Calvert Hall QB helps Ravens, stadium run smoothly
Seniors are iPad savvy at Oak Crest
PrevNext