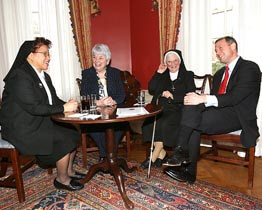 ANNAPOLIS – Standing inside the governor’s mansion he has occupied for less than three weeks, Gov. Martin J. O’Malley told a group of Catholic educators he never would have pursued a career in public service were it not for his own Catholic education.

Glancing at some 30 Catholic schoolteachers and administrators that included Sister Columbkill O’Connor, O.S.F., his sixth-grade teacher from Our Lady of Lourdes School in Bethesda, Gov. O’Malley expressed his gratitude for their service.

“I was lucky to have holy women like Sister Columbkill who were terrific to me and to my family and who helped me learn some of the most important lessons in life – the corporal works of mercy, the spiritual works of mercy, the things you remember to try to live every day of life more fully,” said Gov. O’Malley, who hosted the guests Feb. 1 in honor of Catholic Schools Week.

When Patricia McGann, principal of Our Lady of Lourdes presented the governor with a blue-and-gray school sweatshirt, a holy card and some letters from children, the famous alum broke out into his old school song.

“I was president of Our Lady of Lourdes School,” the governor added with an impish smile. “It was a great administration.”

Brother Kevin Strong, F.S.C., president of Cardinal Gibbons School in Baltimore, called it a privilege for Catholic educators to meet the governor in his home and join him for lunch for more than an hour.
“I think it’s a great opportunity for us to communicate with the governor in an informal way,” said Brother Kevin, adding that Gov. O’Malley’s background highlights the value of Catholic education.

“I think it speaks well to the whole experience of Catholic education – that everyone gets a chance to improve themselves,” he said. “They learn leadership skills. They are able to make an impact.”

Ms. McGann said a first grader at Our Lady of Lourdes told her he too wants to be governor some day.

“He really thinks he can do it because there was a little boy who was in the same classroom who went on to become governor,” she said.

“Oh, he was an excellent student,” she remembered. “He came from a very nice family.”

During their visit, educators received a tour of the mansion from the governor and they caught the governor’s ear for some lobbying on state support for Catholic schools. They also met Scout, the first family’s new pet Airedale terrier mix puppy, who unexpectedly bounded down the stairs from the residence’s second floor to enjoy the visitors’ affection.

Mary Ellen Russell, associate director for education with the Maryland Catholic Conference, said this was the first year during Catholic Schools Week when a governor had lunch with Catholic educators.
“It’s a great honor,” she said. “We’ve never had anything like this before.”