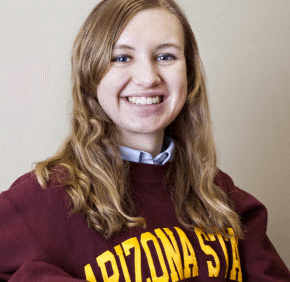 By Maria Wiering
mwiering@CatholicReview.org
Twitter: @ReviewWiering
HAGERSTOWN – A spelling bee sparked her ambitions.
Jessica Swarner was in eighth grade when she advanced to the National Spelling Bee in Washington, D.C. She lost in the preliminary rounds (one of the words was “panmnesia”), but a full week in the nation’s capital fostered an early interest in the city’s history and politics, which she hopes to expand as she heads to Arizona State University in Tempe to study political science, and afterward, attend law school.
One day, she may even run for office.
Leadership seems to come naturally for Swarner, 17, a recent graduate of St. Maria Goretti High School. Class vice president, National Merit Award finalist, National Honor Society member and yearbook co-editor who also played lacrosse and volleyball, Swarner launched the school’s Positivity Club during her junior year to inspire goodness within the student body.
“It’s not really anti-bullying. It’s something to help make a more positive atmosphere to try to discourage that behavior,” she said. “We do fun, proactive projects.”
She developed the idea after attending the 2011 World Leadership Congress, an annual international youth leadership event, held that year at Loyola University in Chicago.
The club launched Positive Post-It Day, where students leave affirming notes on each other’s lockers, and a similar Valentine’s Day initiative with hearts. In November, club members wrote thank-yous to each staff member.
“People seem to really enjoy it,” she added.
Swarner is the oldest daughter of Michael and Jackie Swarner. Before Goretti, she attended St. Mary Catholic School, which is associated with her parish, St. Mary.
Being at Goretti has boosted Swarner’s confidence, she said.
“It’s given me so many opportunities to join things and have leadership positions,” she explained. “It’s shown me that I can lead things, and that’s something I can bring into college with me.”
Class valedictorian with a 4.26 GPA, Swarner accepted a full scholarship to ASU’s honor college.
She expects the discipline she learned while managing school work, sports and clubs to pay dividends in college, where she hopes to play club lacrosse and participate in political organizations. She played middle in volleyball and midfield in lacrosse. She has played lacrosse for 10 years and earned a spot on the U.S. Lacrosse All-Academic Team and first team, all-Washington County last year.
Juggling so many activities taught her to “move quickly” between activities, she said. That extra planning also applied to her academics.
“Sometimes you have to stay up late, work on the bus. It takes a lot of commitment, especially studying in any free time you can get,” she said.
Swarner said her faith plays “a huge role” in her life, and she wants to make God a priority.
“Faith just keeps me going,” she said. “It was part of what influenced me to start the Positivity Club, too: Treat your neighbor as you want to be treated.”
Kathleen Lilly, a Goretti religion teacher and Positivity Club moderator, called Swarner “a force for good.”
“You get a little window into the soul when you teach religion,” she said. “(Jessica) quietly sets a very strong, pure example of being a young Christian in today’s world, and does that in a way that’s friendly and appealing and just herself.”
Read about more stand-out grads:
Catholic Review’s 2013 Graduation Profiles
Copyright (c) June 14, 2013 CatholicReview.org
PrevNext