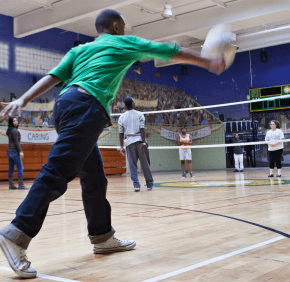 By Elizabeth Lowe
elowe@CatholicReview.org
Twitter: @ReviewLowe
HALETHORPE – If not for Good Shepherd Services, an 18-year-old isn’t sure she would be alive today.
“Honestly, if there wasn’t a place here for me,” said Rachel, whose identity is being protected by the Catholic Review, “I wouldn’t be alive right now.”
Rachel, who endured emotional abuse from family members, has been at Good Shepherd for five years. Last year, in an effort to harm herself, she swallowed a pen and marker.
“When I woke up,” she said, referring to surgery she had to remove the items, “people were telling me I was blessed. I took that and ran with it.”
According to Good Shepherd administrators, Rachel is one of the tens of thousands of youths who have received treatment from the institution, which in 2014 will begin its 150th year of service.
“It’s a source of gratification and pride,” said Religious Sister of the Good Shepherd Mary Carol McClenon, Good Shepherd’s mission integration coordinator. “We’ve been able to provide services to people in need all this time. It’s a testimony to the importance of this work and God’s blessings.”
Good Shepherd’s mission – “one person is more precious than a world” – guides the organization, said Derrick Boone, president and CEO.
According to their website, the roots of Good Shepherd Services date to 1641, when St. John Eudes established the mission in Caen, France. The Sisters of the Good Shepherd have been serving Maryland youths and their families since 1864 when they opened the first house of the Good Shepherd in Baltimore.
In 1970, Good Shepherd Services moved to its current location in Baltimore County. A 70-acre residential treatment facility currently serves about 25 males and 60 females from Maryland and Washington, D.C., Boone said. Until a few years ago, the facility was all-female.
Youths, typically ages 13-18, weren’t successful in lower levels of care and require treatment for emotional and behavioral issues, Boone said. Many suffer physical or sexual abuse, have witnessed gunfights or were victims of human trafficking or forced prostitution.
In addition to psychiatric care, alcohol and drug treatment is available. Family involvement, if appropriate, is “critical to successful outcomes,” said Boone, who noted families can visit daily. Youths attend The Good Shepherd School for grades 8-12.
The duration of most youths’ stay is about nine months.
Some students, said David Brown, Good Shepherd’s vice president of program development, who previously served as the school’s assistant principal, principal and director of education, catch up after coming to school “years behind.”
The school provides youths with a setting rich in consistency and adults who believe in them, as opposed to the outside world, where, Brown said, “Most kids are waiting for someone to give up on them.”
After-school time is “highly structured” with activities, Boone said.
As for Rachel, the 18-year-old female, her future looks bright. She expects to be discharged from the facility in early December. She will live independently and plans to become a chef.
“It makes me feel good,” Rachel said of her impending graduation. “It makes me feel very independent.”
Did you know?
The celebration of Good Shepherd’s 150th anniversary includes plans by Francis Ryan, president of the organization’s board, to walk 3,200 miles from San Diego to Ocean City from March 15 to July 1. Ryan hopes to raise $3 million for Good Shepherd.
For information, visit gssmaryland.org.
Also see:
Basilica’s young adult Mass attracts younger generation
‘The Church gave me everything that I am:’ Longtime education advocate shares his story
PrevNext