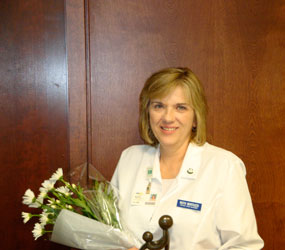 Ruth Bertuzzi is trained and experienced in noticing very small changes in patients at Good Samaritan Hospital, where she is a patient care manager. She knows that being alert to these changes can often make a significant difference in the patient’s outcome.

That skill proved invaluable one day last fall, when the 52-year-old nurse made her regular rounds on the hospital’s medical-surgical floor.

She had stopped in to visit a young man who was in a coma-like state as a result of severe injuries suffered in a car accident eight years before. He had been transferred to Good Samaritan from a long-term care facility, something that had happened quite a few times in the past when he had experienced a medical crisis and required more specialized, intensive care.

Even though she didn’t expect a response, Bertuzzi talked to the patient, hoping to make him aware of her presence.

“There was something different about him this time,” said Bertuzzi, who earned her bachelor’s and master’s degrees from Baltimore’s College of Notre Dame of Maryland.

Looking at him closely, Bertuzzi saw him move his head ever so slightly. She sensed that the patient was trying to communicate, something that hadn’t happened in the past.

“I asked him questions, and he continued to move his head,” she said. “I geared my questions so as to get yes or no answers and he responded appropriately with nods and then blinking his eyes. I hadn’t seen him move spontaneously before, but now I saw that he could move his left hand slightly on command. That was quite something.”

Surprised, but excited and delighted, Bertuzzi immediately called in the patient’s physician and other hospital caregivers to evaluate the young man’s condition.

“A whole team of people jumped in to help, and their teamwork was remarkable,” Bertuzzi said.

After the patient’s evaluation, a speaking valve was inserted in his trachea (windpipe) and he was provided with an adaptive call bell so that he could signal his nurse. Later, he was able to sit in a chair and he started to speak.

As a result of this extraordinary outcome, Bertuzzi was nominated for and received the coveted, national “DAISY Award” given for exceptional nursing care.

The award was established in 1999 by the family of J. Patrick Barnes of Seattle who died at age 33 of complications of Idiopathic Thrombocytopenic Purpura, a blood-clotting disorder.

The family wrote that, “When Pat died, we felt compelled to express our profound gratitude to nurses for the work they do for patients and their families every day. This is the primary mission of The DAISY Foundation.”

Bertuzzi said she was “surprised” at receiving the award but chose to give credit to the medical and rehabilitation team that cared for the patient. As for her role, she said, “patient advocacy is simply part of my job, and the reason you go into nursing.”

Her award specifically cited her caring actions, noting that the patient’s recovery was “nothing short of a miracle, especially when he smiled for the first time in eight years. Thanks to Ruth’s commitment to providing Good Samaritan experiences to all patients always, the patient’s quality of life has improved to a level no one had imagined possible.”

Said Bertuzzi, “I hope and pray everything goes well for him. I was just doing my job. Every patient is important and deserves the very best care we can possibly provide.”

To a large extent, though, that care stems from Bertuzzi’s Christian faith, she said, noting that “it’s OK to pray here, and that’s a wonderful thing, and it makes a real difference for our patients and our staff.”